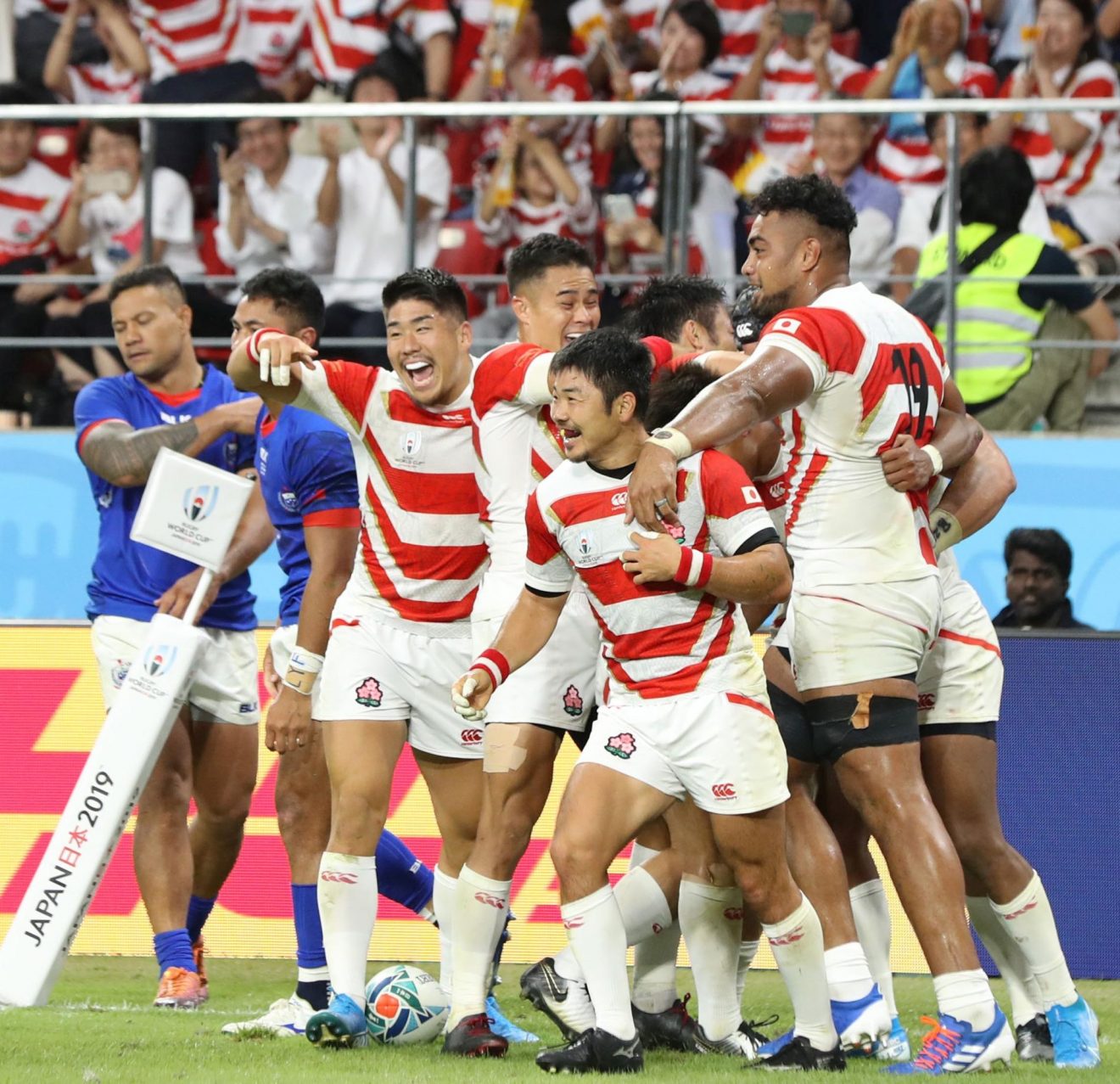 TOYOTA, AICHI – The Brave Blossoms played their third match against Samoa (15th in world rankings) at The City of Toyota Stadium on Saturday, October 5.

Japan took the lead early on, and Samoa was able to level the score again, but the Brave Blossoms proved too strong, taking the match with a 38-19 win, winning a bonus point and making it three wins in a row.

Leading up to their third Pool A game, Japan won the opening match against Russia 30-10, as well as a tough match-up against former world number 1 Ireland 19-12. On the other hand, Samoa split their first two games, winning convincingly against Russia 34-9, but outclassed by Scotland 0-34.

In this game, Japan kicked-off, and both teams employed a kicking strategy from the go. The Brave Blossoms tested the Samoan backline with quick kicks from the ruck, eventually cracked the opposition defense and were rewarded with a penalty kick.

Yu Tamura put the Blossoms up on the scoreboard with a penalty goal within the first three minutes. Japan was up 3-0.

Shortly after the restart, Wing Loman Lemeki ran the sideline but Samoa regained possession. A line out to Japan with another forceful run towards the try line pressured the Samoan defense and resulted in an offside to Samoa. Tamura precisely sent the ball over the posts, extending the lead with another successful penalty goal. Japan was up 6-0.

Samoa hit back almost immediately with strong defense and Japan was penalized for holding on to the ball in the ruck. Henry Taefu’s penalty was good, and Samoa trailed 6-3.

The Brave Blossoms were careless with the ball and also played sloppy defense, rewarding an advantage play to Samoa who drove towards the center of the field to position for a drop goal, but missed wide to the right. The advantage was played, and Samoa opted for a penalty goal. Taefu connected and the score was level again. What a game.

Lots of back and forth from both teams, neither showing assertiveness and taking control of the game. A penalty was awarded again to the Brave Blossoms, and Tamura put Japan up again 9-3 in the 24th minute with another penalty goal

The momentum shifted in Japan’s favor, and a late challenge from TJ Ioane against Japan’s fullback Kotaro Matsushima resulted in a sin bin. All seemed to be in Japan’s favor at that stage.

Matsushima was the center of attention again, with a menacing run on the side of the field leading to a Rafael Timothy try on the opposite side. Tamura was on target again and converted the kick, extending Japan’s lead by ten points, 16-6.

The rest of the first half reverted back to some back-and-forth play. Samoa was awarded a penalty in the 33rd minute and Taefu kicked another penalty goal, making it 16-9. Japan took the lead into half time.

Samoa put on the first points in the second half with a successful penalty goal to Taefu, chipping away at Japan’s lead 16-12.

Shortly after, Japan was awarded a penalty from an obstruction of play, and Tamura’s accuracy was put to the test as he attempted from 42 metres out. His shot narrowly misses to the right and Samoa fielded the catch, but opted for a line drop out.

Backrow Kazuki Himeno displayed a fine defensive play, forcing a turnover in the 49th minute that put Japan in a prime position to attempt another penalty goal. Tamura calmly sent the ball over the posts this time, extending the lead again.

Tamura again tested the Samoan back line with a crafty kick in play. Himeno played a central role in a running maul in the 53rd minute, resulting in the second try of the game. Tamura converted again, and Japan widened the lead, 26-12.

The next possession was immediately turned over from the kick, and Samoa capitalized with a strong run towards the try line. The Brave Blossoms played very strong defense for 13 phases, but finally conceded an offside penalty, leading to a Samoa scrum feed.

Samoa looked like they were going to score again, but Himeno with the heroics reclaimed possession from another strong defensive play, forcing a turnover at a very crucial time. The careless play by Japan continued, forcing them to play defense again.

Samoa dominated possession for the next 10 minutes or so, and was relentless with their running plays. Japan finally conceded, and Samoa scored a try on the 73rd minute. Taefu scored and converted his own try, closing the gap to 26-19.

The Brave Blossoms stole possession after a couple of phases from the restart, leading to a Kenki Fukuoka try – reminiscent of his game clinching try against Ireland. Tamura missed the conversion but Japan was up 31-19 with 3 minutes to go, and an opportunity to be awarded a bonus point if Japan scores another try.

The crowd was aware of the bonus point and roared in loud support for the home team. Japan got in position for a set play from a line-out, and the Brave Blossoms packed together, getting enough momentum to reach the try line. But Samoa’s defense was strong and dissipated the wave.

The closing minutes finished in a strong display of heart from both teams, with their stamina and endurance nearing the edge of their tanks.

Samoa opted to keep the game alive by choosing a scrum but couldn’t get the ball going and was unfortunately penalized, giving Japan another chance to claim the bonus point by scoring a try.

The home team crowd’s fire was rekindled and their loyalty was rewarded as Matsushima scored a try in the corner. Tamura’s kick hit the post but angled through the posts successfully.

Japan won in a thrilling fashion, 38-19, and got the bonus point, putting them on the top of Pool A. No side.

In a post match interview, Tamura, who has most of Japan’s points (40) in this year’s World Cup campaign, said the next match (against Scotland) should be treated like the final: “We’re going to lay it all on the line.”

Next up for Japan is the highly anticipated game against Scotland at the International Stadium Yokohama on October 13. Samoa plays their final Pool A match against Ireland at the Fukuoka Hakatanomori Stadium on October 12.