NAGOYA ー After struggling in his short program on Saturday, November 20 and trailing the leader by more than 17 points at the Japan Junior Championships, Kao Miura proclaimed, “I will just do the free [skate]. I am really going to win!”

The 16-year-old quad-jumping sensation lived up to his prediction on Sunday, storming back to capture the title with an incredible free skate that included two clean quads and five triples.

Miura’s winning total score was 229.28 points, which edged out Tatsuya Tsuboi (227.60), the leader after the short program, by less than two points. Nozomu Yoshioka finished third with 191.80.

Young phenom Mao Shimada won the women’s competition with a jumping exhibition, coming from fourth place after the short program with a sensational free skate. The 13-year-old, who was third last season, won with a tally of 188.51.

Miura opened with a beautiful triple axel, then followed it with a strong quad salchow and a huge quad toe loop/triple toe loop combination. He received a lengthy standing ovation from the crowd at Nippon Gaishi Arena as he finished his program to a selection of songs by Vicente Amigo.

Though Miura fell on a quad toe loop later in the program, and received just level threes on two of his spins and step sequence, his jumping prowess was still enough to carry him to the top of the podium.

Miura’s free skate score was a titanic 165.28, and he burst into tears when the tally was posted on the video board.

“[After the short program] I was so worried that it was useless to have been there for a year,” Miura stated. “But I was relieved to be able to perform well for the free, and I felt relieved from my anxiety.”

Miura, who was eighth at the NHK Trophy last week, went on to say that he “wants to be on the podium at the world junior championships and to be in the final group in the Japan Championships [free skate].”

Tsuboi, the 2018 junior champion, began with a shaky quad salchow, but went on to hit seven clean triples in his free skate to Rachmaninoff’s “Prelude No. 10.” However, the 18-year-old from Okazaki, Aichi Prefecture, received just a level two on one of his spins and step sequence.

“I’m a little disappointed that I stepped out of the quad salchow, but I’m glad I was able to show what I’ve been practicing other than that,” Tsuboi commented. “In the Japan Championships we are planning to incorporate the quad salchow from the short program. I hope to make the world juniors.”

Yoshioka, a 17-year-old from Osaka, was pleased to make the podium for the first time.

“I’m very happy because I worked hard in practice,” Yoshioka remarked. “The combination (quad toe loop/triple toe loop) wasn’t so good for me, and it was dangerous when I got off four turns, so I got the second triple with spirit.”

Shimada opened her free skate to “Queen’s Gambit” with five jumps, landing them all with flair. She began with a fine quad toe loop, then hit a triple lutz/triple toe loop combo, followed by a triple flip and a triple loop.

Shimada received level fours on her spins and a level three on her step sequence.

“I’m glad, I didn’t think I could win the championship,” Shimada stated. “I want to improve my expressiveness and skating to improve the PCS (Program Component Scores). I want to put in two quads from next year, first two quad toe loops.”

Sumiyoshi struggled at the beginning and end of her program. The 18-year-old started with a triple flip/triple toe loop combo, but then two-footed the landing on her triple lutz. Near the finish, she doubled the front end of a planned triple salchow/double toe loop combo.

“I’m disappointed that I couldn’t demonstrate what I’ve been practicing, but I’m glad that I’m [in] second place because I’ve come to the maximum of spins and steps and have them evaluated,” Sumiyoshi commented. “I thought I would try to attack, but my body shrank and I couldn’t make a good jump like in practice.”

Chiba was absolutely delightful in her free skate to “Butterfly Lovers Concerto.” The 16-year-old from Sendai landed five clean triples and earned level fours on her spins in an energetic performance.

“I still don’t feel like I made a mistake,” Chiba said. “I think it was because all the jumps were barely enough. I wasn’t sure of success, but I’m glad I didn’t make any big mistakes.”

Hana Yoshida, who was second last year, took fourth with 172.55. 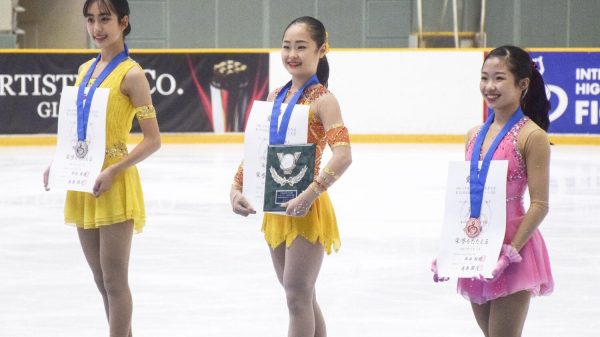