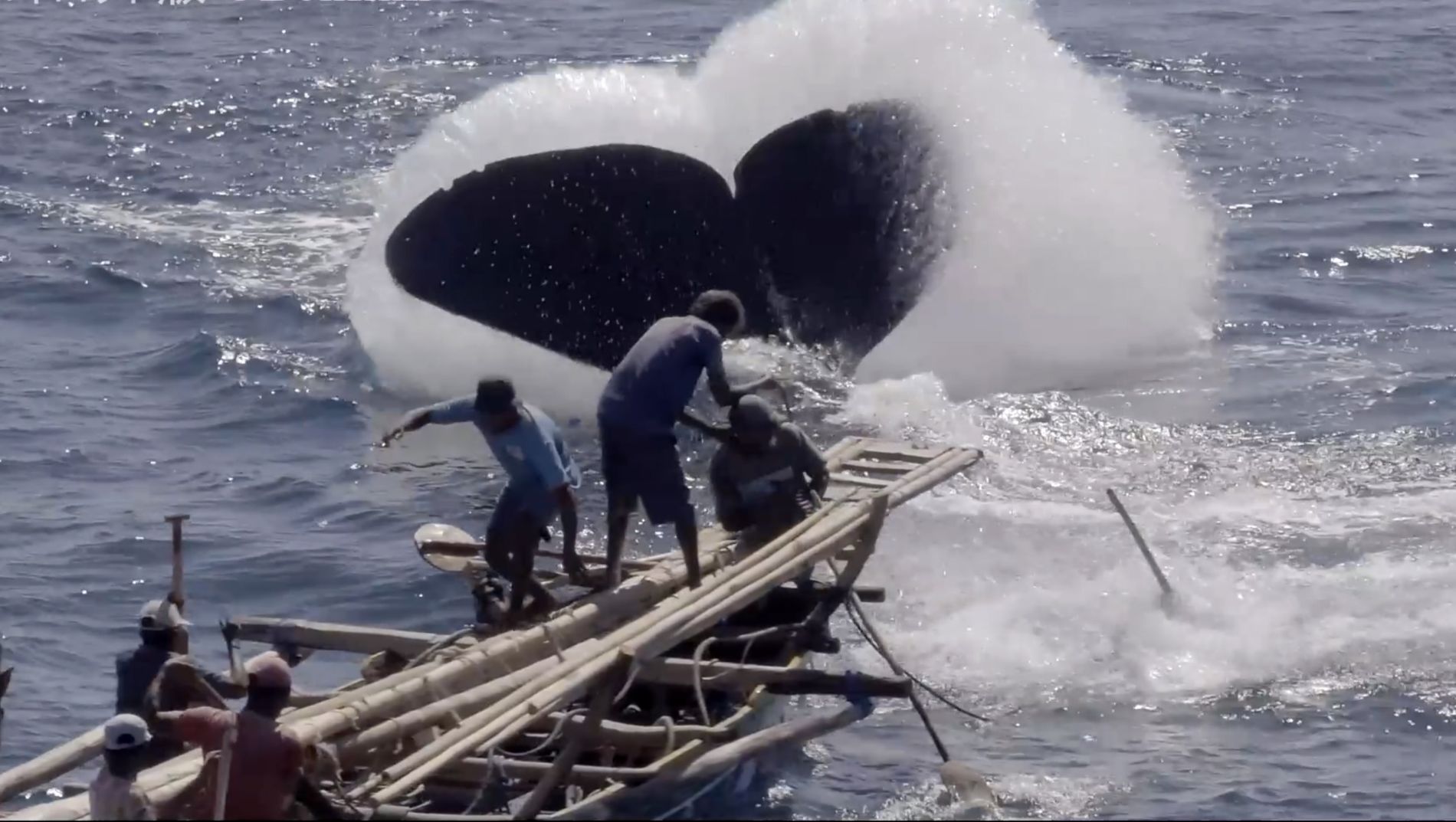 In the great ocean, a lamafa (whale hunter) engages in battle with a whale to humbly and gratefully take its life. This intense scene was captured by Japanese photographer Bon Ishikawa, who has been observing a single village’s sacred practice of whaling for over a quarter of a century.

Ishikawa has traveled widely throughout the world to shoot photos on the theme of prayer. His filming took him to one small village in 1992 — Lamalera on the island of Lembata in Eastern Indonesia — and he has since returned regularly. His documentary film The Whale Hunter is scheduled to premiere in the spring of 2020.

The village of Lamalera in Indonesia has a population of 2,000 people. Over the 27 years Ishikawa has been visiting the village, his ties with the local people have deepened significantly. Although he is a foreigner, he has assimilated into the life and lifestyle of the village.

As part of the Lamalera community, he experienced firsthand the spirit of their traditional whaling with its deep connection to the region’s social structure and religious beliefs. Moreover, he saw how the social security of the community revolved around whaling, with preferential treatment in the distribution of whale meat given to the poor and households that had lost their primary wage earner.

Over the years, Ishikawa kept a faithful record of how the brave lamafa set out on small whale boats, hunted sperm whales, and passed their whaling traditions on from one generation to the next.

He explained the significance of whaling to the community: “Eating whale meat is the sole option for these villagers. It’s hard to grow food in the poor soil of their volcanic land, so whaling is their lifeline. In such an environment, the lamafa are considered heroes who take on the huge responsibility of providing for the community while risking their lives when they step onto the bow of a whaleboat.”

His film is a succession of breathtaking scenes — the majesty of nature revealed by the sea, mountains, and forests. It portrays the integrity of the villagers who continue a lifestyle that values harmony as the highest of virtues even in the 21st century.

It also reveals the fierceness of life itself, coursing through the whale as it challenges the hunter. And it shows the courage of a lamafa in a fight to the death with a 15-meter-long sperm whale, eventually taking it with a single harpoon.

The images captured in the film confront us with the truth of whale hunting, and it is a far cry from the “context” described in the endless debates over the pros and cons of whaling.

Ishikawa took to the village many high-performance cameras and editing equipment, including underwater cameras and drones in recent years. While he stayed at the village, however, the hunters failed to catch whales for several consecutive years. This led some superstitious villagers to blame Ishikawa. But he persevered. He knew the film would be missing its essence without the whale hunt.

In June, Ishikawa went out to sea for what he thought was his last opportunity to film the whaling of the Lamalera village, but they returned empty-handed. He extended his visa, but soon it was his last full day on the island before he had to return to Japan.

Remarkably, it was on that last day that a lamafa on the small whaleboat Ishikawa was riding dove into the sea and made the first attack on a whale with his harpoon.

Ishikawa didn’t miss the crucial moment. “It was nothing short of a miracle. God had planned an amazing spectacle, and I was able to capture footage that will astound the world,” he said.

The film revolves around the real life story of a lamafa who lost his life while whale hunting, a father who tried to overcome his son’s death, and an older brother who inherited his late brother’s calling. In the story a whale rammed into the boat and desperately tried to escape as the lamafa raised a battle cry, before diving into the sea again….

Ishikawa’s first film was The Most Beautiful Village in the World, which he made to support Nepal in the aftermath of the major earthquake in 2015. The film, produced almost entirely by Ishikawa himself, received high regard in the film industry.

For the current film, Ishikawa adamantly refused to depend on big sponsors to preserve his option to continue filming without pressure until he was completely satisfied. In the summer of 2019 he painstakingly edited the footage he had accumulated over the years to create a film with substance and yet within the target length.

In recent years, Lamalera’s whale hunt has been in danger of dying out, just like traditional whaling in Taiji, Wakayama Prefecture, because of increasing pressure from anti-whaling groups. Ishikawa’s mission was to show the reality of whaling in Lamalera, its deep connection with the region’s religious beliefs and culture.

Ishikawa lamented: “It’s a matter of time before this primitive form of whaling dies out. Whaling in Lamalera has many similarities to whaling in Japan during the Edo period, and I want to show this invaluable film record to future generations.”

He added, “I didn’t depend on big sponsors and refused to compromise, using all the time that was necessary for production.” Final editing of the film is expected to be finished in late 2019, well ahead of its premiere next spring.

Photographer and nonfiction author Bon Ishikawa was born in 1960 in Oita Prefecture. After working as a photographer for the French news agency AFP, he has worked from 1990 as a freelance photojournalist. His work has taken him to more than 60 countries around the world for photography on the theme of the symbiosis between nature and humans. His literary books and photo books include The Last Whale Hunters (Shinchosha, 1997), Inori No Daichi (Iwanami Shoten, 2014) and The Days After : Higashi Nihon Daishinsai No Kioku (Asuka Shinsha). He directed the film, The Most Beautiful Village in the World, which premiered in 2017.

(Click here to read the original article in Japanese. Find more articles on the subject of whales and humans at this link.)

2019-12-12
Previous Post: Director Keiko Yagi: Why I Had to Make ‘Behind THE COVE’ Amid the Anti-Whaling Uproar
Next Post: Don’t Let the Anti-Whaling Zealots Impose Their Hypocrisy on Japan