[Mythbusters] White Makes Right When It Comes to Whaling 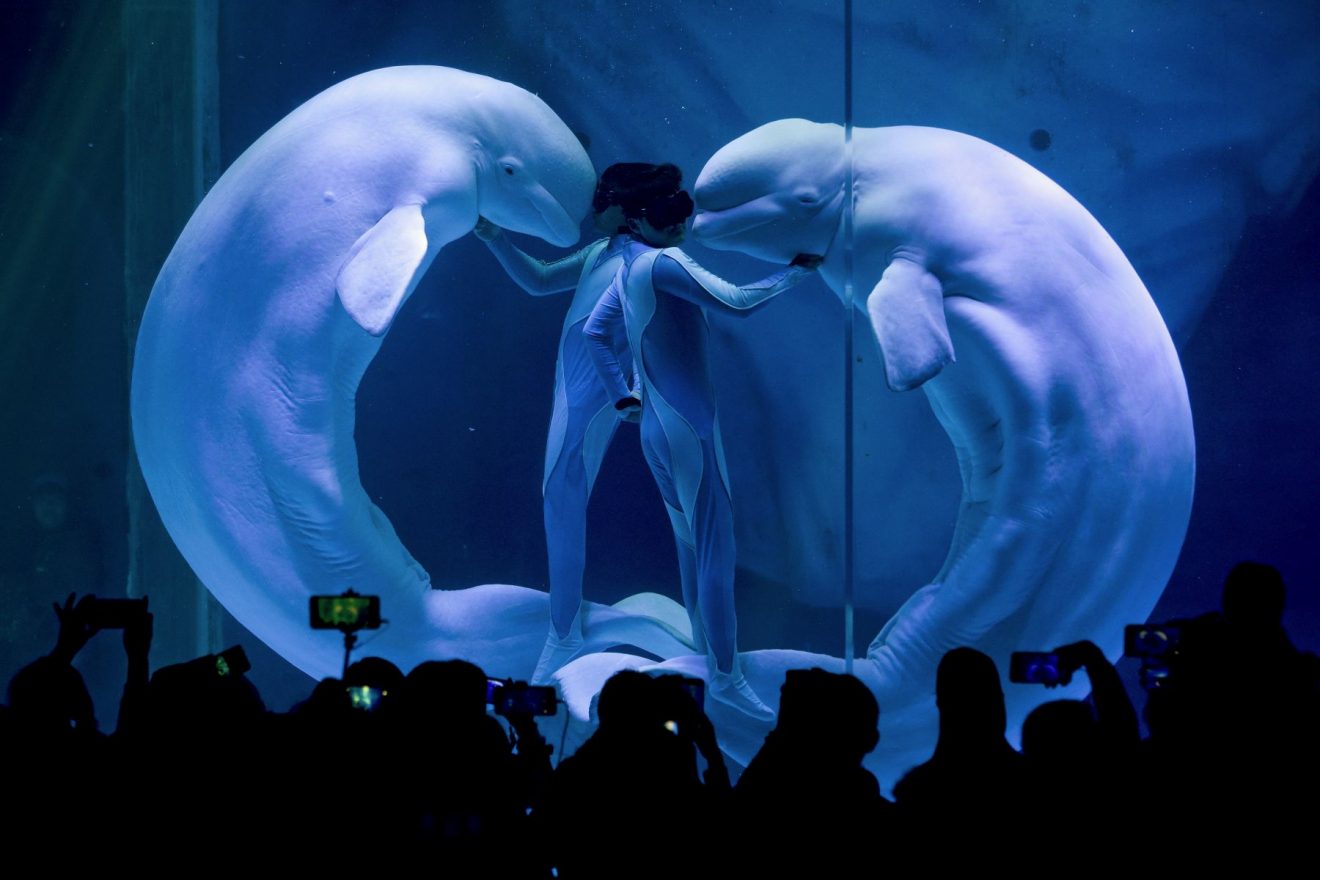 On the last day of 2018 the editorial board of The New York Times (NYT) issued one of its ex cathedrastatements telling Japan and the Japanese what it had determined was best for them.

Under the headline “Japan: Stop Slaughtering Whales,” this NYT version of a papal bull repeated — in several variations — statements that “most of the world…have moved on from the days when killing whales was deemed an acceptable pursuit.”

This clearly shows that the NYT editorial board is well aware that Japan is not the only nation outside the International Whaling Commission (IWC) that engages in commercial whaling. Yet, nowhere are those other nations named: Norway, Iceland, and, depending on definition, Denmark.

It is hard to imagine an approach more carefully crafted to confirm the belief of many Japanese, and not a few non-Japanese, that racism is a component of foreign opposition to Japanese whaling.

Adding to the implicit message that the NYT editors think whaling is not so bad if white people do it, is an article that appeared only a few months before the condemnation of Japan. That earlier article was headlined “Meet Iceland’s Whaling Magnate. He Makes No Apologies.”

Although Sea Shepherd opposition was mentioned, the article basically let Kristjan Loftsson, a commercial hunter of fin whales, have his say, including his advice that those offended by his whaling operations should look the other way. The article concluded with him saying, “There’s nothing wrong with this.”

Reading the editorial board’s condemnation of Japan in conjunction with this article on Iceland makes it hard to think that the NYT editorial on Japan was driven by anything other than racism.

Not to be outdone, The Los Angeles Times (LA Times) editorial board issued its we too statement on Japanese whaling last January 3. It proclaimed, “But among the more than 80 nations that belong to the International Whaling Commission and have signed on to its ban on commercial whaling, Japan has always been a renegade member.”

This artfully omitted the fact that, while Iceland and Norway are nominal members of the IWC, both conduct commercial whaling following quotas they set themselves.

The LA Times editorial went on: “But the start-up of commercial whaling in its coastal waters in the North Pacific is an outrageous flouting of a long-established and still necessary global effort to preserve whale species and help them thrive.”

In a long-standing pattern of woke Americans telling the Japanese what they should do, the editorial concluded, “It’s past time for the Japanese to join the overwhelming majority of the world and put the practice of whale hunting to rest, once and for all.”

Again, there was no mention of Iceland and Norway, even though whaling in their exclusive economic zone is precisely what Japan has said it will do.

The Guardian commentator Owen Jones also launched a vitriolic attack on Japan published under the title “The idea of Japan resuming commercial whaling is Horrifying.”  Although mentioning “other nations,” he named none. He then concluded, “Japan’s actions should meet universal condemnation.”

Again, it is hard to see this as anything other than racism. We won’t even mention those “other nations” since they happen to be predominantly white.

Although many appending comments to this article agreed with Jones, not a few pointed out the failure to mention Norway, Iceland, and Denmark (Faroe Islands).

National Public Radio was among those reporting Japan’s withdrawal with no reference to Icelandic or Norwegian whaling. It, too, used quotes such as, “This is the path of a pirate whaling nation, with a troubling disregard for international rule.”

Even before the flap over withdrawal from the IWC there was a spate of articles about Japan killing pregnant whales in its Antarctic operations. A typical article such as one in The Guardian carried a quote saying, “The killing of 122 pregnant whales is a shocking statistic and sad indictment on the cruelty of Japan’s whale hunt,” while making no mention of Iceland or Norway.

Whales do not have obvious “baby bumps,” and if you kill whales, some will be pregnant females. Whales have long gestation periods (10-17 months), making it difficult or impossible to avoid taking pregnant whales through a seasonally limited catch. Further, the only reason those critical of Japanese whaling had this ammunition is because Japan reported this information as part of its research whaling.

Reports that Norway had taken more than three times the Japanese catch and that 90% of the whales taken by Norway were pregnant received a small fraction of the attention and condemnation meted out to Japan. Even where there is condemnation of Norway in these articles, the rhetoric is notably muted compared to that used for Japan.

The Japanese government responded to the NYT editorial with a letter published (January 11, 2019). The rebuttal noted that the editorial “didn’t mention critical facts,” which were given as (1) there would be strict catch limits; (2) no endangered species would be taken; (3) whaling would be limited to “Japan’s 200-mile exclusive economic zone, where it has the sovereign right to use the living resources”; (4) “there is no general international prohibition on whaling.”

The letter continued, pointing out that “whaling has been a part of Japanese culture for centuries, just as it has been in Norway, Iceland, and Denmark, and among indigenous peoples in the United States and Canada, who continue to engage in it.”

Perhaps wisely, the Japanese government did not describe the NYT editorial in terms of racism. Doing so would have almost certainly have provoked whataboutism of the form, “How can Japanese condemn racism when Japanese discriminate against….”

But, it is not only Japanese who have sensed racism in the condemnation of Japanese whaling. Other news media do not seem to have published a rebuttal if one was received.

Some Australians have recognized a racism component in Australian opposition to whaling, including some who might consider themselves activists. University of Queensland anthropologist Adrian Pearce, writing in The Conversation in 2011, noted that Iceland’s “booming Arctic fin whaling” was more of a threat to whales than the faltering Japanese operation in the Antarctic, but he observed:

“Demonizing the Japanese has long been the other side of the coin to worshipping the whale.” … But Icelanders look like us and talk like us, their science is much the same as ours (including the science which sets whale quotas) as are their political processes. Turning our gaze northwards to Iceland’s whaling economy will require realignment of our moral compass.

What Japan is Actually Doing

The one sided-condemnation of Japanese whaling and Japan’s withdrawal from the IWC ignored an important point that a small number of more intelligent and less biased commentators noted. The announced plan for commercial whaling in Japanese territorial waters and its economic zone does not represent an increased whale kill, but rather a substantial scaling down of Japanese whaling.

Japan’s territorial waters and economic zone whaling has been going on at ever diminishing scale without adverse foreign comment. Under the announced plan, antarctic whaling will be stopped as well as North Pacific expeditions.

Adding to the feeling that the NYT and LA Times editorials were knee jerk Japan bashing is the absence of serious consideration of what Japan says it will be doing: scaling down its whaling and perhaps even phasing it out. If the NYT and LA Times were concerned first and foremost about protecting whales rather than bashing Japan, this should have been emphasized.

Whether Japan is in the IWC or not, whether the whaling is called commercial or research, if far fewer whales get killed, that should have earned Japan praise and led to condemnation of Iceland and Norway because both have announced increases in their self-imposed quotas.

Japan’s Decision an Objective ‘Win’ for Everyone

Remarkably, even Jeff Kingston — a longtime critic of Japanese policy in many areas and a severe critic of the Abe government in particular — recognized this in an opinion piece published in the South China Morning Post. Although not entirely sure his scenario would play out, Kingston observed, “Thus, it is possible to imagine a positive scenario where Japanese whaling will be scaled down, taxpayers’ money will not be squandered, and Japan will no longer be cast as the Voldemort of the oceans.”

Julian Ryall, another inveterate critic of Japan and Japanese policy, cited Japanese sources to make much the same point in an article in The Telegraph. Other British papers had unsigned articles making the same point.

As noted by Kingston and a small number of other commentators, the Japanese withdrawal from the IWC and planned resumption of commercial whaling has something for everyone: Sea Shepherd can proclaim success. The Australians and New Zealanders can applaud the ending of Japanese whaling in an area over which they claim a special interest.

Those Japanese who see the IWC strictures as an affront to national sovereignty and pride can say we told the IWC what to do with its moratorium. Whaling communities can find comfort in the stated government policy of resumed commercial whaling.

Costs of Maintaining the Fleet

There are also suggestions that the costs of maintaining the Antarctic whaling operation have made it impossible to sustain. The main factory ship, the Nisshin Maru, is said to be in need of replacement or complete refurbishment.

In addition, new regulations on ships operating in the Antarctic region require them to be double-skinned. That means that Japan would have to ignore this regulation or replace the rest of the whaling fleet as well.

The Japanese withdrawal from the IWC, the abandonment of research whaling, and the resumption of commercial whaling might actually be the beginning of a stealth withdrawal from whaling. This “don’t ask, don’t tell” possibility should have occurred to the United States and the United Kingdom editorial writers, if for no other reason than that it was being enunciated in readily available English language news media.

I have eaten whale meat. I rather like it. I have even tried to cook it myself with unfortunate results. The least bit of overcooking turns it rock hard.

Nonetheless, as a Japanese taxpayer and later as a citizen, I have always thought that Japan should get out of whaling or at the very least stop the research whaling that was widely and rightly considered a farce. The Japanese demand for whale meat can easily be met by imports from Iceland or Norway. Let them take the heat.

Having said that, I must also say that racist criticism of Japanese whaling is not to be permitted.

Moreover, racist criticism of Japan is not limited to whaling. English language articles about Japan in both foreign media and domestic media, such as the Japan Times and Japan Today, are larded with derogatory comments about Japanese culture. It is insular, backward, xenophobic, sexist, feudal, and even worse. Even Japanese writers make such statements.

At the same time, Japanese companies should seriously consider withdrawing advertising from media, both domestic and foreign, that manifest blatant racism against Japan and the Japanese.