Ice hockey in Japan is getting a big assist from the hugely popular medium of anime.

The new anime “Pride of Orange” was released this month and has been named an official supporter of Japan’s national women’s ice hockey team known as “Smile Japan.”

The anime features a group of high school girls who are introduced to ice hockey and become members of the fledgling “Dream Monkeys” team.

The anime’s executive producer, Masaya Ochiai, hopes that “Pride of Orange” will generate interest in ice hockey both at home and abroad.

The story of the team is based loosely on that of the Nikko Ice Bucks, a professional men’s team in Japan. Ochiai and Nikko Ice Bucks team director Hideji Tsuchida attended Waseda University together.

“I hope [this anime] will be an opportunity for many people to know about ice hockey,” Tsuchida said. “Ice hockey is still a minor sport in Japan so I want people from different fan bases to know how great ice hockey is.”

The Dream Monkeys play their home games in Kirifuri Ice Arena, which is home to the real life Ice Bucks. The off-ice scenes in the anime evoke scenes of Nikko, the famous tourist destination about two hours north of Tokyo.

Nikko is home to many famous temples and shrines including the famous Toshogu shrine which features the “see no evil, hear no evil, speak no evil” three wise monkeys.

The Ice Bucks provided input on the various aspects of hockey to the animation for the past two years.

While the team has enjoyed some success in recent years, the Ice Bucks are perennial underdogs in Japanese ice hockey as are the Dream Monkeys who go up against the powerful Kushiro- based Snow White from Japan’s northern island of Hokkaido, a hockey hotbed in real life.

While Japan’s national men’s team continues to struggle on the international stage, the women’s team has seen a boom in popularity in recent years.

Currently sixth in the International Ice Hockey Federation rankings, Smile Japan has qualified for the 2022 Winter Olympics where the team will be competing in its third straight Winter Games.

There are four Japanese pro teams in the six-team Asia League Ice Hockey but they have been limited to only domestic games the past two seasons due to the COVID-19 pandemic. The other two teams are from Russia and South Korea.

Produced by CAAnimation, “Pride of Orange” can be seen on Japanese live streaming website AbemaTV. 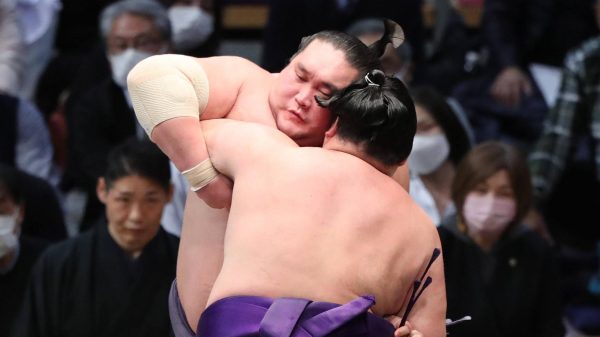 The lone yokozuna has a one-win lead over ozeki Takakeisho and rank-and-filer Abi. 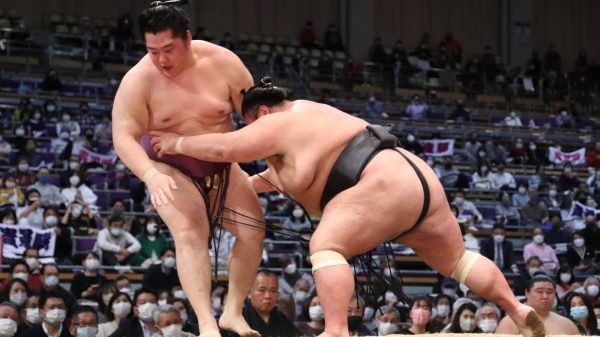 A day after losing to Meisei, the ozeki bounced back to stay one win back of Terunofuji.