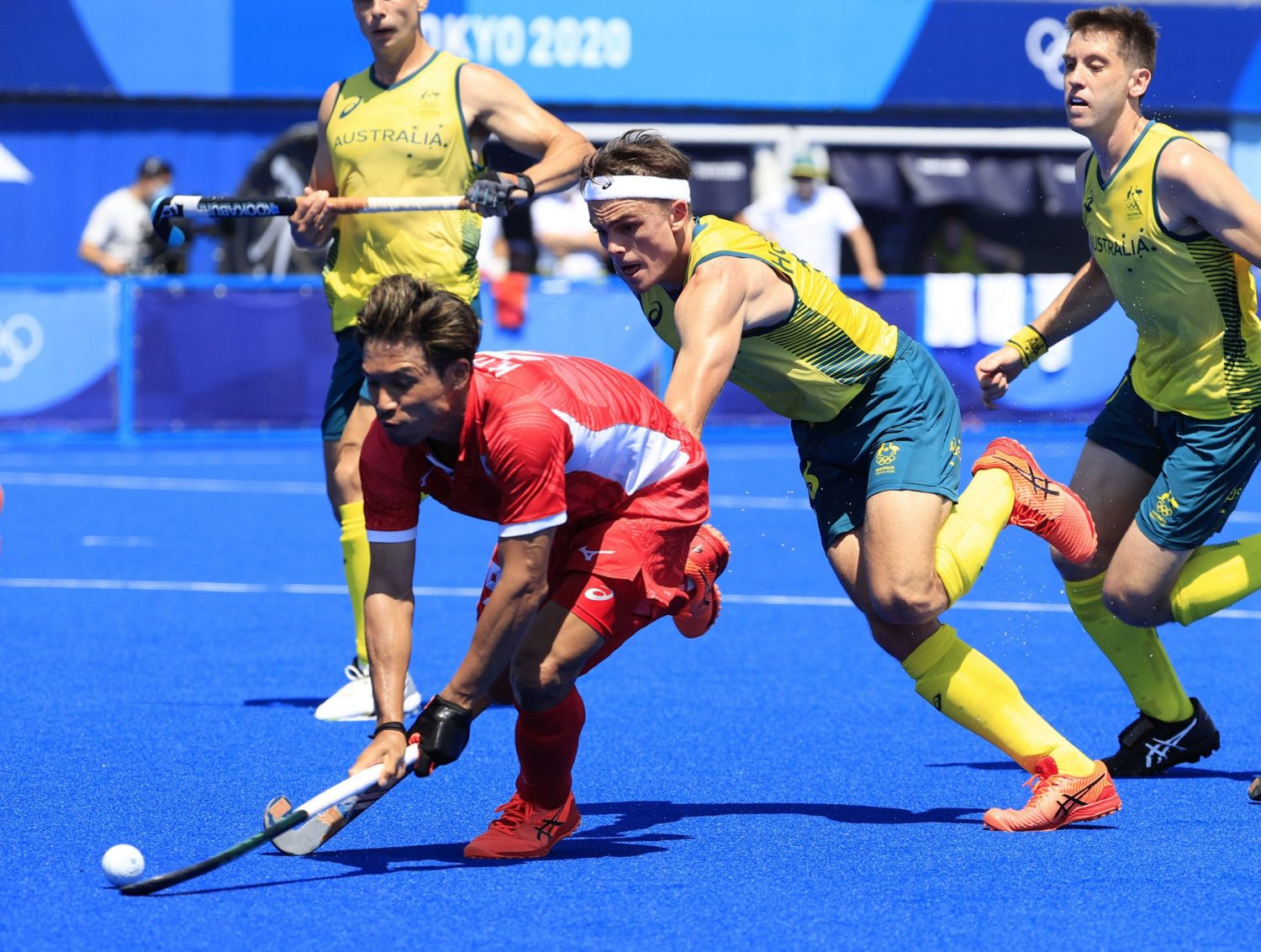 The Japan men’s field hockey team’s last Olympic appearance was at the 1968 Mexico City Games, before the Beatles broke up and before Neil Armstrong became the first man to walk on the moon.

In Japan’s return appearance in an Olympic tournament, coach Siegfried Aikman’s squad delivered a valiant performance against world No. 1 Australia at Oi Hockey Stadium, falling 5-3 to the Kookaburras on Saturday, July 24.

Aikman telegraphed his aspirations for Japan in the run-up to this match.

“We want to improve daily with Samurai Japan,” the 62-year-old mentor tweeted on July 22, using the team’s shared nickname with the men’s national baseball team. “Yesterday is history. Today you need to perform and tomorrow you do the desired. Ganbarimasu!”

That singular focus helped the hosts in a match that got underway at 9 a.m.

Tim Brandt and Thomas William Craig produced the first real highlights of the match, scoring in the 11th and 14th minutes, respectively, as Australia took an early 2-0 lead.

Japan, ranked 15th in the world, rebounded from a slow start and led 3-2 at halftime before the law of averages kicked in.

There was palpable excitement for Japan’s players as Kenta Tanaka scored twice in a five-minute span (22nd and 27th minutes), sandwiched around a Yoshiki Kirishita tally in the 26th.

Did anyone predict that Japan would be leading 3-2 at halftime?

Maybe Team Japan’s families and best friends had those expectations, but probably nobody else.

Credit Japan for stepping onto the field with fierce determination coupled with a hard-nosed effort that produced results, especially in the second quarter.

The intermission appeared to give the Kookaburras a wake-up call.

And then Australia, determined to live up to its world-class billing, delivered a narrative of its own: Welcome to our comfort zone.

The Kookaburras brandished their No. 1 ranking in the second half, knotting the score on Blake Govers’ penalty corner conversion in the 34th minute before Aran Zalewski made it 4-3 four minutes later.

Daniel James Beale put the ball in the net in the 50th minute to give the visitors a bit of breathing room.

The Joy of Watching Niche Sports

One of the most enjoyable aspects of the Olympics is getting a chance to catch glimpses ー or extended views ー of sports that are often not on the menu for the average sports fan. But great athletes exist in all of these sports, and seeing them perform in front of empty venues is still a worthwhile way to spend leisure time.

Which is why field hockey comes to mind. So does archery and diving, rowing and badminton. There’s a delight in having our normal viewing habits change, and that’s par for the course with the Olympics.

In the first full day of Tokyo Games, the hour-long men’s field hockey opener showcased the players’ exceptional hand-eye coordination on both teams on the blue turf, along with the admirable work Aikman has done over the past few years in preparing Japan for the Tokyo Olympics.

Japan, silver medalist at the 1932 Berlin Olympics, hasn’t been a name tossed into the conversation of elite world teams, but a step in the right direction occurred when it finished first at the Asian Games in 2018, winning gold in the continental championship for the first time. Samurai Japan had also finished fourth overall at the Asia Cup on four occasions, most recently in 2007.

Facing the world’s best to begin its Olympic campaign provided a good measuring stick for Japan.

In the end, the Kookaburras, named after terrestrial tree kingfishers, demonstrated their superiority.

Australia coach Colin Batch acknowledged his team wasn’t at its best, though.

“The first game of the tournament, things aren’t quite right,” Batch was quoted as saying by the British newspaper The Guardian. “We do have the capacity to build through the tournament ー that’s what we want to do. We wanted to get off to a good start ー we won the game, there’s lessons to be learned, particularly coming into [medal contender] India tomorrow.”

Japan faces Argentina at 7 p.m. on the same day, and has three remaining matches in pool play after that (against New Zealand on July 27, versus Spain on July 28 and against India on July 30).

Zalewski noted that the unpredictability of sports in the midst of the global pandemic also factored into the match.

“It’s a really even competition,” Zalewski said, according to The Guardian. “Given there’s been COVID as well, and we haven’t been able to train and play each [other] as much over the past 18 months, that really throws a spanner (a wrench) in the works. The unpredictability of this Olympics will be a real spectacle.”