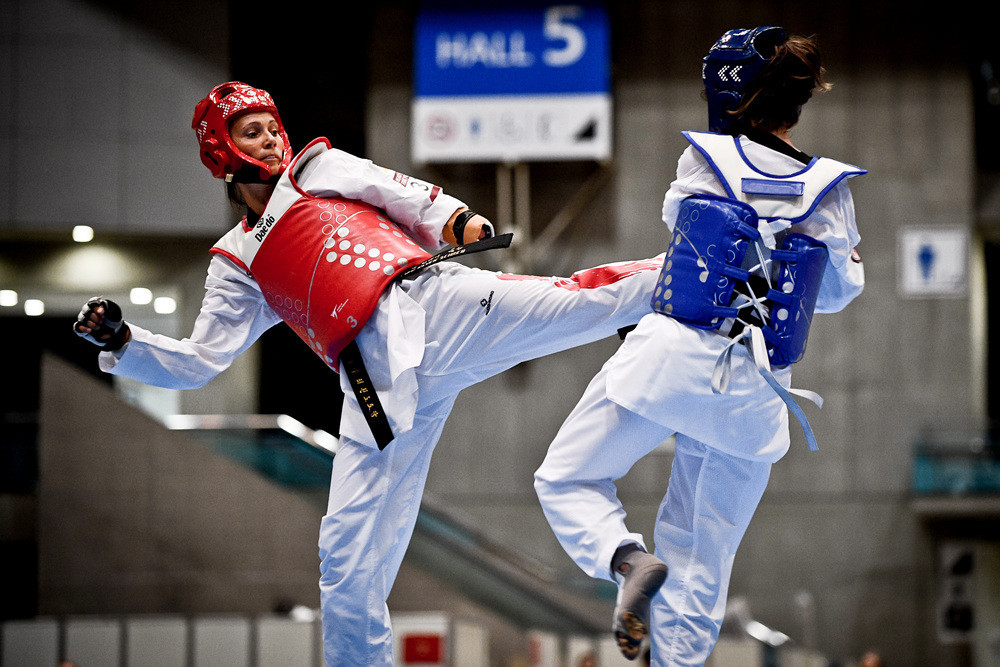 Lisa Gjessing, a four-time world champion, enters the Tokyo Paralympics as a one of the most accomplished para taekwondo competitors. (WORLD TAEKWONDO)

Lisa Gjessing has one thing she wants to add to her long list of achievements in para taekwondo: A Paralympic medal.

With the sport making its debut at the Tokyo Games, Gjessing is finally getting a shot to complement her four world championship and three European titles with the ultimate prize.

Gjessing, the under-58kg K44 world champion, said she wasn’t sure if her sport would ever make it on to the Paralympic Games program.

After many years of campaigning, para taekwondo was added to become the first full contact sport included in the Paralympics. Athletes score points based on landing kicks to the body with sufficient power and accuracy.

The main difference from Olympic taekwondo is that kicks to the head are banned in the Paralympic version. Athletes with various classifications of arm impairments are taking part in Tokyo.

“I was happy with just being able to compete at world championships, but when the Paralympics became a possibility, nothing was going to stop me from being a part of it,” the 43-year-old Dane told Olympics.com. “I didn’t even have a choice. I had to do it. It’s been a goal since my daughters were very small, and now they are 12 and 15, so it’s a long time.”

Gjessing was a member of Denmark’s taekwondo team before she developed cancer. Her left hand was amputated in May 2012 and she had to relearn her sport.

“I was doing taekwondo when I was younger, then I stopped due to work and kids. Getting back into it, there was some adapting because you use your whole body in taekwondo. But because it’s mostly about kicking, I can do most of what other people doing the sport can do.”

Gjessing works for the Danish police director, and the COVID-19 pandemic has given her flexibility when it comes to training.

“They’ve let me train in the morning and work in the afternoon,” she said. “It is busy, but it’s great. And my family has got involved, coming to training camps too, which is nice. I have been teaching my girls to kick.”

While recuperating from surgery, Gjessing was inspired by the 2012 London Paralympic Games.

“After surgery, I was feeling insecure about who I was,” she recalled. “Then I saw the Games in London, and it really hit me. I was blown away by these people competing, smiling, crying, being part of something bigger than themselves. I made the choice that I also wanted to do this.”

Competing in para taekwondo has allowed Gjessing to look at life in a different way.

“People told me I’d have depression after my amputation,” Gjessing said.  “I didn’t have that. Instead, I had something else, something that fills me out with love and caring and opportunities. I would definitely like to have two hands, it would make some things easier, but my life is definitely not worse since what happened. I love my life and I’m thankful.”

Gjessing will take to the mat on Friday, September 3 in the 58-kg quarterfinal.

Gjessing isn’t the only athlete thankful to be competing in Tokyo. An athlete caught up in the unrest in Afghanistan has realized her dream of taking part in the Paralympics.

Zakia Khudadadi became just the second woman from Afghanistan to compete in the Games when she took part in the women’s 49-kg taekwondo event on Thursday, September 2 at Makuhari Messe in Chiba. It was a victory that she was able to compete, despite her 48-34 loss to Victoriia Marchuk of Ukraine in the repechage quarterfinal. (Uzbekistan’s Ziyodakhon Isakova beat Khudadadi in the round of 16 earlier in the day.)

Khudadadi gave up hope of competing in Tokyo at one point following the collapse of the Afghan government last month.

Khudadadi and long jumper Hossain Rasouli were both prevented from getting to Tokyo safely after the Taliban seized power.

But in a video message last month, Khudadadi made a plea for permission to be able to leave and, in a sudden turn of events, the pair were able to make their way to the Games.

Khudadadi is the first woman from Afghanistan to compete in the Paralympics since 2004.

Rasouli, who was originally scheduled to compete in the T47 100-meter event, participated in the men’s long jump on Tuesday, August 31.