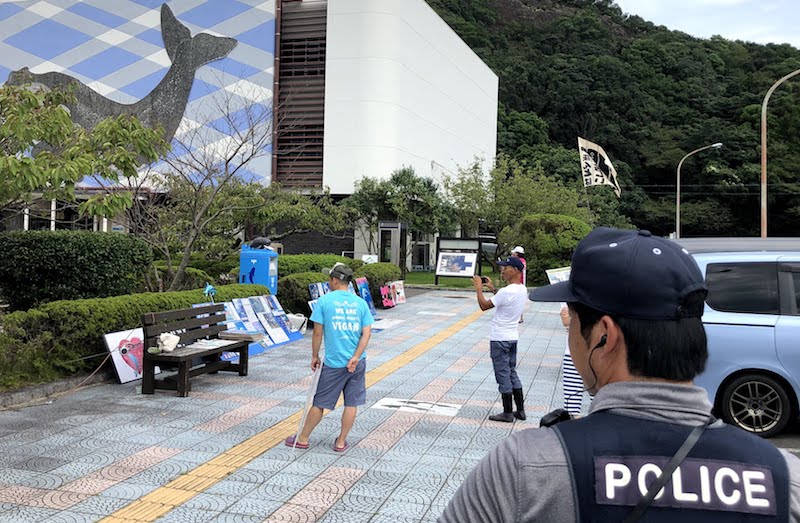 Bunta Iwaya is a conservative blogger who has lived in the U.S. for 15 years. He has investigated issues such as the plastination of human bodies in China, the direct action movement on Free Tibet in Europe and the U.S., issues surrounding the movie ‘The Cove,’ and the arrest and escape of Paul Watson.

More than 10 years have passed since the 2009 premiere of the Oscar-winning film The Cove, which is critical of the small cetacean fisheries (commonly called “dolphin hunting”) in the town of Taiji in Wakayama Prefecture, southwest Japan.

The film’s graphic footage of animals being slaughtered for food, secretly filmed by disguised cameras, has triggered the attention of animal rights activists and groups in the Western world, such as Sea Shepherd, and brought a throng of activists to the small town.

Meanwhile, the documentary was not favorably received in Japan as it portrayed Japanese local fishermen of a small rural fishing village on the southeastern coast of the Kii Peninsula like the ghostly inhabitants in a horror mystery movie or the villains in a crime thriller.

After the film’s release, large numbers of activists from overseas began to visit Taiji, peaking at nearly 200 in the 2013-2014 season. There was only one policeman stationed in the small town at that time, and the activists were ill-behaved and uncontrollable. And they escalated their harassment against the small community.

The activists hung around the town behaving like rogues, directly insulting and abusing fishermen and factory workers, blocking traffic, harassing with their cameras, filming illegally inside restricted and private properties, among other offenses. This continued until police and the Japan Coast Guard beefed up security, after which the activists began to narrow their focus to online activities.

In recent years, the number of foreign activists visiting Taiji each season has stayed around 30. The number dropped considerably after the Ministry of Justice began refusing entry to repeat visitors of Sea Shepherd. Eventually, the group was unable to maintain an uninterrupted presence of activists for the whole season, and had practically dropped out of the campaign by the 2017-2018 season.

From Direct Activism to Internet Incitement

Other than Sea Shepherd, the Dolphin Project — an anti-captivity group led by Ric O’Barry, a former dolphin trainer for the American TV series Flipper known for his leading role in The Cove — also maintains a constant presence in Taiji during the drive fishery season until now.

Although members of this group are engaging in basically the same activism in Taiji under “tourist visas” as Sea Shepherd, there has only been one instance of Dolphin Project activists being refused into Japan. That was four years ago, when their leader was refused entry in Japan.

Due to a constant presence of the police and the Coast Guard in town, and along with the development of internet technology, these groups have shifted their style of activism from “direct action” to “indirect action,” using internet live-streaming sites. While broadcasting live activities of fishermen and dolphin trainers, these activists’ role is to keep speaking to the internet to inflame the audience with abusive language to stir up hatred around the world for the fishermen and trainers.

Typically, the top priority of activist groups like these is to use the internet to get their supporters to help fund their activities. And one of the easiest ways is to use hate speech to advance their campaigns. This is part of the reasons why they tend to sensationalize the activities of Taiji fishermen, and why their online activism essentially encourages the internet lynching of, particularly, fishermen and dolphin trainers.

The groups that engage solely in online campaigns, deliberately or not, are likely counting on the influence of their website on other groups’ extremists, hoping that those who take the hate speech seriously may decide to engage in “direct action” with more forceful tactics. This has been happening in Taiji.

There have been cases of property damage in Taiji twice within the past three seasons, where someone has cut the nets of dolphin pens in the harbor and a dolphin facility in order to release captive dolphins. In October 2017, three European activists were arrested for violations of Penal Code Article 234 (forcible obstruction of business) after creating disturbances at a dolphin show at Adventure World in the same Wakayama Prefecture.

Scenes of slaughter in The Cove have created emotional responses among outsiders with sense of disgust and discrimination against the local food culture in Japan.

Sea Shepherd has also expanded its activities to the Faroe Islands (Danish autonomous territory), where local fishermen have long engaged in the practice of drive hunts of pilot whales called Grindadráp. However, the group’s campaign against the minority’s food culture in the Faroe Islands does not appear to be as successful as its campaigns against the town of Taiji, where dolphins are also captured live for aquariums and dolphin facilities.

The aquariums are a modern industry that protesters can target to avoid dealing with cultural matters in their effort to minimize the risk of being stigmatized as racist. For the last few years, however, the whole anti-whaling movement seems to have shifted focus to protesting the commercial use of dolphins in captivity. It is apparent that somehow Sea Shepherd activists in Taiji had switched their slogan to something similar to what the Dolphin Project has claimed, after the group’s failure in the Faroe Islands.

Since the beginning of criticism of Japanese whaling, and particularly when its whaling fleet has been attacked by activist groups, a broad spectrum of ordinary Japanese — not just conservatives — have taken the attacks as a cultural invasion by outsiders.

In 2015, when the World Association of Zoos and Aquariums (WAZA) demanded its Japanese body, the Japan Association of Zoos and Aquariums (JAZA) to prohibit member facilities in Japan from purchasing captive dolphins from Taiji, the impact on the Japanese society was perhaps even greater than the movie The Cove because of the shock it produced among aquarium fans in Jap

Behind WAZA’s heavy-handed method was a lawsuit filed against WAZA by Action for Dolphins (AFD) (formerly Australia for Dolphins), an Australian dolphin conservation group. This group also has been staging court battles in Japan through two Japanese activist plaintiffs: against the Taiji Whale Museum in 2014, with the support of The Dolphin Project’s Ric O’Barry, and against Wakayama Prefecture and its governor in 2019.

At this point, AFD’s lawsuits in Japan have produced one win, two losses. One of two cases filed against the Whale Museum awarded the group ¥110,000 JPY in 2016, in contrast to the ¥3.3 million JPY in compensation it was claiming. The other case was dismissed in 2019. The lawsuit against Wakayama Prefecture was rejected.

Very few people in Japan realize that the problems with WAZA stem from a global campaign, not only against aquariums, but also against zoos. Both have been criticized for their treatment of animals.

Considering the broader context, it is easy to guess that WAZA’s headquarters and other member facilities offered Taiji as a sacrifice in order to protect themselves — just as some aquariums and dolphin trainer associations have claimed that they are “clean,” as long as individuals from Taiji are not involved.

O’Barry, who has been an icon of the global campaigns against the animal captivity industry. His ideology on dolphin rights and liberation would quite fit well with the ideology of veganism, which proscribes any use of animals in society. The anti-captivity movement that O’Barry launched in the 1980’s has grown globally to become part of the worldwide veganism movement, whether he is a vegan or not.

The majority of the Japanese public views aquariums and zoos as valuable facilities for learning about nature and the ecology of the wildlife. At the same time, they eat animal and fish products daily, with gratitude for their sacrifice.

Public access to discussions on animal welfare and species conservation are important to find some level of social consensus. But aggressive efforts to exterminate the whole industry smack of cultural intimidation. Predictably, many Japanese seem to be tired of the activists’ persistent bashing and interference against Japan’s culture and legitimate industries.

In the end, 10 years after the film’s release, the behavior of activists has vastly diminished the impact on Japanese society that the director of The Cove, its supporters, and activists had expected.