Nomomania: An Inside Look at How the Dodgers Handled the Media Demands

Third in a series

In decades past, the 162-game Major League Baseball season was a demanding workload for a team's publicity department under normal circumstances.

Local, regional and national media outlets kept a PR staff plenty busy with long lists of requests. Coverage from Spanish-language media also filled a growing presence over the years as the influx of Latin American players arrived in the big leagues.

The Los Angeles Dodgers experienced a new reality in 1994 with the arrival of Korean pitcher Chan Ho Park, and the press corps that followed him.

Nomomania signaled an even greater barrage of intense media focus, when Hideo Nomo joined the Los Angeles Dodgers before the start of the 1995 season.

In a March 2020 article, Mike DiGiovanna of the Los Angeles Times captured the essence of the start of Nomomania with a memorable scene from Dodgertown in Vero Beach, Florida.

The article began this way:

“Hideo Nomo pulled into the Dodgers’ spring training complex in Vero Beach, Fla., for the first time in March 1995, hopping out of a minivan just long enough to grab the keys to his dormitory room from a team official and drive away.

“About 50 Japanese writers, photographers and cameramen who had staked out Nomo for hours chased it from behind.

“Nomo and his interpreter drove slowly around a small loop in front of the team’s headquarters with the media horde in tow, creating a scene right out of a Keystone Kops film.

“They drove around in circles, and the media ran after them until they finally just tuckered out,” said Arizona Diamondbacks team President Derrick Hall, a Dodgers assistant media relations director in 1995. “We watched this go on for about 30 minutes and thought, ‘Oh my goodness, the following this guy has.’ ”

That massive following—before the team had even played a regular-season game—created additional demands for the Dodgers publicity department. Such as: How could they accommodate a huge increase in media requests and maintain their quality standards—and sanity—at the same time?

To gain a broader perspective on the daily demands and overall challenges that the Dodgers PR staff faced in 1995 because of Nomomania, JAPAN Forward reached out to Grace McNamee, who worked in PR for the National League ballclub from 1995-99.

McNamee, who was known by her maiden name (Morino) at the time, saw the rise of Nomomania from the start. After all, she began working for the club just weeks before the 1995 season.

It was a whirlwind, memorable experience.

“I was hired in the publicity department as a college intern to help with the day-to-day administrative work, as well as assisting with the Japanese media because of my bilingual background,” McNamee, who now works as a communications manager for the Los Angeles Angels, told JAPAN Forward. “This was pre-internet and email, so everything was done over fax and telephone. [Nomo] had a large media following from Japan, many of whom had never covered a Major League Baseball team, let alone traveled to the United States.

“I was able to assist in bridging the language and cultural gap for them and to get them to take an interest in covering the team and not just Hideo. We had a great organization that was forward thinking about being global, so I think being in that environment helped as well, as we wanted to make sure that these media members who traveled internationally were welcomed here, while we promoted the team to our fans in the different countries.”

Nowadays, people don't use fax machines as frequently as when Nomo racked up 13 victories, including six in June, and a National League-best 236 strikeouts en route to the 1995 NL Rookie of the Year award. Furthermore, pagers are now considered technological relics.

But at the start of her career in publicity, McNamee needed a pager.

Even when she attended classes at the University of California, Irvine.

“I would sometimes get pages at school. For that, I would have to find a payphone to help a media member,” she said. “The internet was something new and not readily available, so most people had to cover the game and Hideo in person.

“It was challenging at first, but once they began to understand how things worked here, it definitely got easier. When they would switch with another reporter from Japan, they trained each other as well. We were very fortunate to have a great group of media in Los Angeles covering us.”

Leading the NL in strikeouts was, of course, a major element of Nomo’s first season with the Dodgers. Fans had never seen a Japanese pitcher take the league by storm before. The Tornado's fame rose to new heights when he was named the NL starting pitcher for the 1995 MLB All-Star Game on July 11 in Arlington, Texas.

As a result, as the season marched on, increased coverage by Sports Illustrated and Time, Newsweek and The Wall Street Journal, among other prominent media outlets, followed. 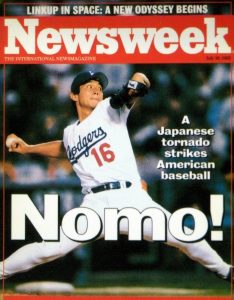 The Tornado at the height of his popularity.

A quarter century later, McNamee admitted that the Newsweek cover still resonates with her. She called it her favorite magazine cover of Nomo.

“It personifies how big his following was,” McNamee told JAPAN Forward. “Here was a Japanese player, challenging Major League Baseball players in their own game, and he was succeeding to receive the nation’s attention. I also have a photo of then-Prime Minister Hashimoto and [U.S.] President [Bill] Clinton exchanging a gift, which happened to be Hideo’s glove. As a student of political science and Japanese language and literature, that represented how big Hideo was from a U.S.-Japan relations standpoint.”

For McNamee and her colleagues, teamwork played a pivotal role in handling the constant flow of requests for Nomo’s time.

But it was impossible to meet everyone’s demands.

“We had a great staff in the department that we were able to divide and conquer,” McNamee says now. “This included the interns that we had. Hideo was a very private person and he did not conduct any one-on-one interviews, so everything was done through a press conference style. I would take notes so that I could provide quotes to our English-speaking media from the Japanese media press conference.”

McNamee remains grateful that she had a chance to begin working for the Dodgers during a transformational period for baseball—before Ichiro Suzuki, before Hideki Matsui, for instance. She described it as “a wonderful experience.”

“While the Dodgers organization and [owner] Peter O’Malley was always involved with the Japanese and Japanese-American community, having Hideo as a player definitely brought more opportunities,” she said. “I was able to assist various departments when it involved a Japanese client, contract or delegate. This experience helped me later when I worked for a film entertainment company called Square Pictures, which produced the first full CG [computer-generated] synthespians.” 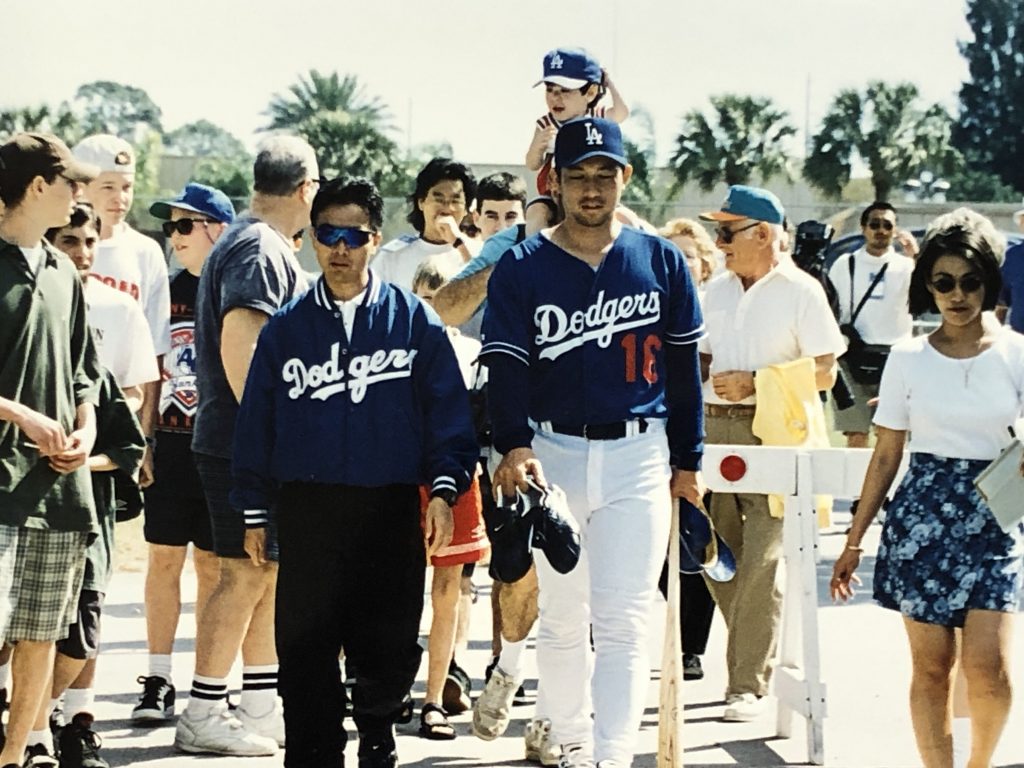 Hideo Nomo (16) was the center of attention at training camp in Vero Beach, Florida, and throughout the 1995 MLB season.

How Nomo Handled the Attention

Throughout his attention-grabbing 1995 season, the press never ran out of questions for Nomo. Journalists always wanted to ask him something else, and McNamee witnessed his day-to-day handling of the never-ending attention.

“Hideo definitely stepped to the beat of his own drum,” McNamee observed. “He had a very calm demeanor about himself and was unfazed by the media attention he received. As I mentioned before, he was a private person and liked to keep it that way. However, I remember going to a Little League clinic with him and he definitely had a great time with the kids.”

Despite the inquisitive press wanting to know everything about Nomo, there were light-hearted moments, too.

“One day Hideo and I were walking back from the field toward the dugout laughing, and the media saw that from afar,” recalled McNamee. “After he went to the clubhouse, I was surrounded by the media asking me about our conversation that made him laugh so much.”

Before Nomomania raised expectations for media coverage on both sides of the Pacific, the Dodgers didn't have to focus on the logistics of handling an endless array of requests from and about Japan.

McNamee, however, saw the evolving process involving the Dodgers and the MLB and NL offices. It was a collaborative approach.

“We worked closely with league offices, especially when we went on the road,” she explained. “There were times I was consulting teams on credential approving processes and working with the foreign media. We created the media list that was shared among the other teams. I believe media relations involves some ‘customer relations’ with the media and I wanted to make sure that those who traveled across the sea to cover us felt comfortable doing their job while they covered us. I felt that was the way we operated, and it came from the top.”

In their progressive approach to expanding the team's PR and news machinations, the Dodgers became the first MLB club to have their own website, dodgers.com.

It was a rewarding experience for McNamee to be a part of the groundbreaking project.

“I was able to assist on that project by helping them create a Japanese version of the website for our fans in Japan,” she said. “I think this type of outreach and feeling connected with the fans was very important to the Dodgers.”

After working for the Dodgers, Grace McNamee draws upon those experiences to help the Angels meet the demands of the press corps. In particular, she knows how the Dodgers dealt with the challenges associated with coordinating Nomo coverage.

Angels two-way player Shohei Ohtani, who left the Hokkaido Nippon Ham Fighters to play for the Angels, has presented similar challenges since 2018. Like Nomo, he earned Rookie of the Year accolades, but did so in the American League.

McNamee also sees parallels in how the Dodgers and Angles have managed their Japanese stars’ time for publicity appearances and time spent in front of cameras, microphones and notebooks.

But away from the ancillary stuff, she said, the way Nomo and Ohtani approach the game is basically the same.

“They share the same passion toward baseball,” McNamee commented. “They took a huge challenge in what they wanted to accomplish for themselves with baseball and chose the U.S. to further their platform.

“Both were blessed with a great support system as well. The Dodgers for Hideo and the Angels for Shohei. [Former Dodgers manager Tommy] Lasorda embraced Hideo from day one and [former Dodgers coach and ex-Angels manager Mike] Scioscia, who was with the Dodgers during that time with Hideo understood what would be expected from a media standpoint for Shohei. The media attention is much similar, especially their first year. I see a lot of similarities on coverage.” 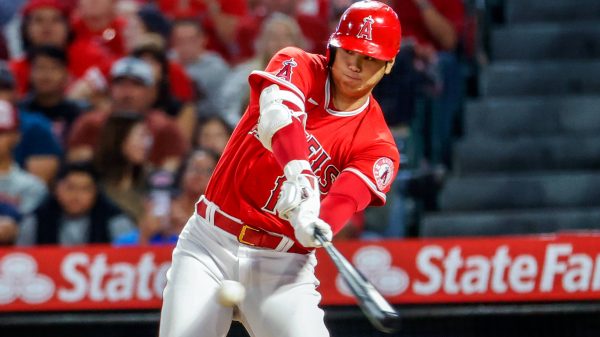 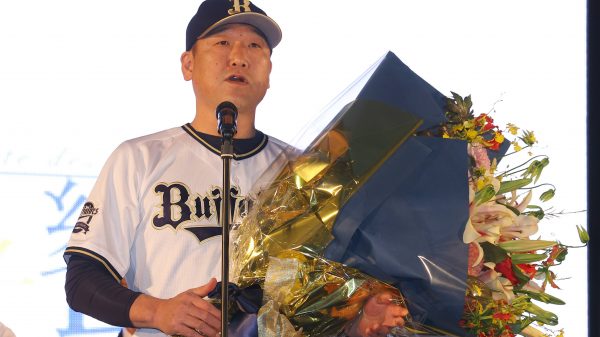 The Orix dugout boss guided the Pacific League team to its first Japan Series title in 26 years, and a manager won the Shoriki... 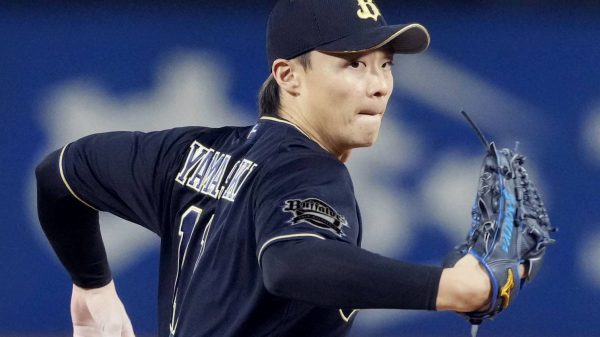 Five Orix pitchers team up for a one-hit shutout in Game 6 at Jingu Stadium as the reigning champions lose their third straight Japan... 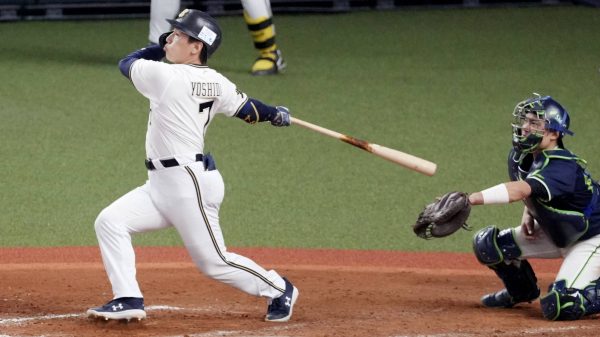 Yoshida connected for a two-run sayonara homer off Scott McGough to send the Japan Series back to Tokyo all tied up. Game 2 ended...