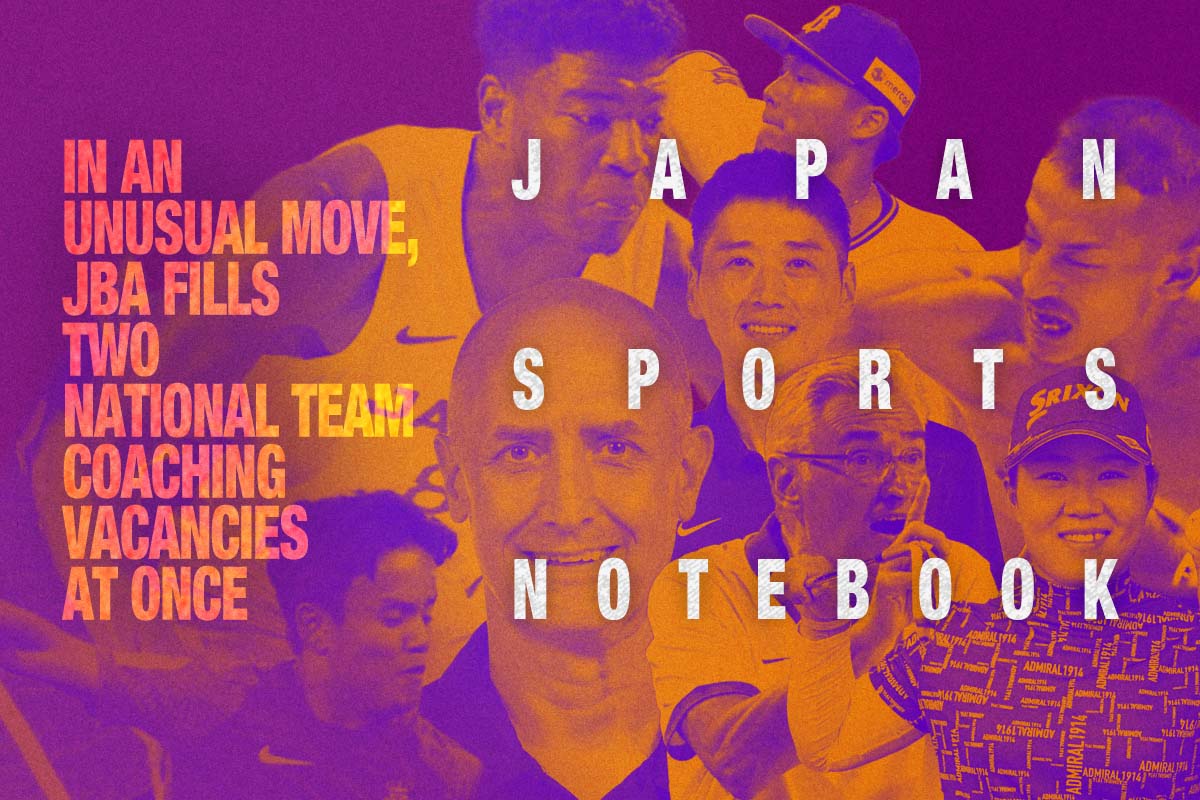 In four years’ time, Julio Lamas built the men’s national squad around the talents of current NBA players Rui Hachimura and Yuta Watanabe and developed the nucleus of the team in the run-up to the Tokyo Olympics.

The former Argentina head coach, who was the handpicked choice of Japan Basketball Association technical director Tomoya Higashino to lead the Akatsuki Five at the 2020 Games, arrived in Japan with lofty credentials. This included guiding Argentina to a fourth-place finish at the 2012 London Olympics.

In the same four years, Tom Hovasse elevated the Japan women’s basketball team, stepping into the spotlight after serving in a supporting role as an assistant coach under former head coach Tomohide Utsumi.

Now a new era begins for both national team programs, with official announcements proclaiming the news on Tuesday, September 21.

Lamas’ four-year contract expired, and he headed home to Argentina after the Olympics with a slew of memories. Higher expectations also exist now for the Japan men’s national team after its first Olympic appearance since the 1976 Montreal Games.

Can Hovasse, a 54-year-old former Atlanta Hawks and longtime JBL player, carry the Japan men’s squad to a new level?

His work in leading the Japan women’s team to the nation’s best-ever finish in an Olympic basketball tournament (silver) on August 5 was impressive. It was universally considered one of the biggest surprises of the Tokyo Games.

After a much-deserved break from the daily grind in the gym, Hovasse returns to work to build off the foundation that Lamas and his coaching staff laid from 2017-21.

Toru Onzuka, who worked as Hovasse’s top assistant for the women’s national team, has been promoted to fill his predecessor’s shoes.

The 42-year-old Onzuka’s first big task at the helm will be leading the four-time reigning FIBA Women’s Asia Cup champion into action at the 2021 continental tourney in Jordan. The event tips off on Monday, September 27, with Japan facing India.

For Hovasse, getting prepared for a FIBA World Cup qualifier against China on November 28 is a top priority.

Expect the Japan men’s team to exhibit many of the same trademarks that were the hallmarks of the women’s team’s success under Hovasse.

When Hovasse was introduced as the new men’s coach at a Wednesday news conference, he spoke about the women’s team’s path to success.

It was a good learning experience for him, he said, and one that will guide him in his new job.

“The biggest thing I experienced at the Olympics was that the athletes believed in me, and conversely I also believed in the athletes and we respected each other,” Hovasse told reporters. “It is important to have a good discussion and create an opportunity to get to know each other because it is not easy to build.”

What should people expect from a Coach Hovasse-led men’s team?

“The playing style is almost the same as the women’s national team from Japan, and I want to use what Japan is good at, based on fast breaks and spacing,” said Hovasse, who arrived in Japan to play for the JBL’s Toyota Pacers in 1990, a year after wrapping up his collegiate career at Penn State. “The basketball style is the same as the Olympics, with 3-point shooting, speed, detailed and thorough play, good passing and cutting …”

As for putting his stamp on his new team, Hovasse knows that personal relationships will be a key, citing trust from his players is paramount.

Hovasse said, “I would like to meet and talk with Rui Hachimura and Yuta Watanabe in person in the United States.”

Lamas expressed gratitude for the opportunity he had as the Akatsuki Five bench boss.

“After four years as the head coach of the Japanese national team, this journey has come to an end,” Lamas wrote in a Twitter post this past week. “It has been a wonderful experience for me. I would like to offer my gratitude to the players, coaching staff, and all JBA members and wish them all the best in the future. Arigato!”

Looking back at the past decade, the Japan women planted the seeds for their success at the Tokyo Olympics by winning the FIBA Women’s Asia Cup in Bangkok in November 2013. It was their first title in the event since 1970.

Looking ahead, Onzuka, who established a successful women’s basketball program at Tokyo Health Care University, has set the highest of targets for the Japan women’s squad: a gold medal at the 2024 Paris Olympics.

“Even if you think about the pressure, what you do is the same,” Onzuka acknowledged. “I want to work with the staff every day to find out how to fill the energy of the players in front of me.”

In Onzuka’s view, there’s a clear-cut path to achieve the ultimate goal.

“I want [us] to pursue the world’s best agility and surpass the height of the opponent,” Onzuka commented. “I aim for a basketball team that synchronizes with a sense of dynamism.”

Mallorca midfielder Takefusa Kubo sustained a knee injury in the first half of his team’s 6-1 defeat to Real Madrid on Wednesday, September 22.

Kubo didn’t play in the second half of the La Liga match.

The 20-year-old addressed the issue the next day on Instagram. He wrote, “I hurt my knee while playing in yesterday’s match and will have to spend a little time off the pitch.”

Kubo will be sidelined for at least a month, according to published reports.

“I’m very disappointed that I won’t be able to help my (Spanish) team and national team during this important time, but I will be offering support from off the pitch,” Kubo wrote. “I will focus on what I can do so that I can rejoin the team and play my part as soon as possible.”

Japan travels to play Saudi Arabia on October 7, then returns home for an October 12 clash with Australia.

Takumi Minamino bagged a pair of goals in Liverpool’s 3-0 triumph over Norwich in the English Football League Cup on Tuesday, September 21.

With the win, Liverpool reached the tournament’s fourth round.

“Other players need time as well to get back on track after an injury, but Taki is in a good moment, trained really well and deserved these two goals,” Liverpool manager Jurgen Klopp told reporters later, according to Kyodo News.

Minamino scored in the fourth and 80th minutes.

Orix Buffaloes hurler Yoshinobu Yamamoto, who shared the Pacific League lead with Fukuoka SoftBank Hawks fireballer Kodai Senga for strikeouts (149) in the shortened 2020 season, is the runaway leader in punchouts this season.

Takahiro Norimoto of the Tohoku Rakuten Golden Eagles is second with 123 strikeouts.

In the Central League, Yuya Yanagi of the Chunichi Dragons is No. 1 with 145 Ks in 146 innings.

Shohei Ohtani is a feared slugger, as evidenced by how pitchers handle him.

For example, the Los Angeles Angels star leads the American League with 17 intentional walks through September 24.

There are, of course, unintentional intentional walks, when pitchers carefully avoid throwing pitches in the strike zone. This has helped Ohtani receive 88 free passes this season.

Ohtani walked three times against the Houston Astros on Wednesday, September 22 and four more times (including two intentional walks) the next day against the same team.

In the series opener against the Seattle Mariners on Friday, Ohtani walked four more times. Among his two intentional walks was a free pass to lead off the ninth inning. The Mariners won, 6-5.

With 11 walks in a three-game span, Ohtani set an American League record. He also tied the MLB record, which was set by Bryce Harper of the Washington Nationals in 2016.

“I love that he’s taking the walks,” Maddon told reporters before the Mariners game, according to the Los Angeles Daily News. “It’s much better than swinging at bad pitches, striking out, making bad outs. He can contribute in other ways, just by scoring runs, getting on base, stealing bases. He needs to do that.”

In late August, the 29-year-old Teraji tested positive for COVID-19, forcing postponement of the world title bout, his ninth title defense, which had been set for September 10.

“I thought of giving up, but thanks to those cheering me on I gave it my all to the end,” Yabuki, 29, was quoted as saying by Kyodo News. “I thought that it would keep going ー even if it killed me.

“Now that I’ve won, I’ll give it some thought,” he added, explaining that he has had second thoughts about retiring.

Teraji won the WBC light flyweight title by outpointing Mexican Ganigan Lopez on May 20, 2017, in Tokyo. It was his 10th professional fight.

Nagoya-born running back Taku Lee, who made the unlikely leap from Japan’s X League, appeared in his first regular-season game for the Montreal Alouettes on September 18.

The 25-year-old was called up to the active roster on September 17, after making a solid impression on the practice squad.

Lee finished with one tackle on special teams and also amassed 49 yards on two kickoffs against the B.C. Lions.

Montreal chose Lee, who previously starred for the X League’s Obic Seagulls, with the 24th pick in the CFL Global Draft this April. He went to the CFL tryout in February 2020, catching the eye of Alouettes front-office personnel.

“Everything is going well,” he said in a July interview posted on the Alouettes website. “There is a lot of adaptation and I am happy the way things are going.

“The guys are big, fast and talented. When you want to be successful, you face the best players.”

“When I actually hit it, it didn’t get very good contact, but I thought it would kind of stop at the top but kind of got on the slope and came down and got the hole-in-one.”

ーNasa Hataoka on her hole-in-one on the par-3 11th hole in the first round of the NW Arkansas Championship on Friday, when she shot a 6-under 65.  A day later, Hataoka shot another hole-in-one, making an ace on the par-3 sixth hole, en route to a 65 to grab a share of the the lead entering the final round.

“It feels great. It’s really positive as I’ve returned [to Japan] aiming to get goals and assists that directly influence the result.”

ーYoshinori Muto on his ninth-minute header in Vissel Kobe’s 2-0 away victory over Shimizu S-Pulse on Friday. Muto suited up for German soccer club Werder Bremen before signing with Vissel in the summer.

“My pitches had good velocity, but I pitched behind the count against good hitters and paid the price. The team has been on a winning streak but I haven’t been doing my job. It’s frustrating.”

ーSeattle Mariners left-hander Yusei Kikuchi, who allowed three runs, three hits and four walks in three innings in a no-decision against the Oakland Athletics on Thursday. The Mariners won, 6-5.