The Brave Blossoms’ 2019 Rugby World Cup hero enjoyed a solid debut season for Clermont, which reached the quarterfinals of the Top 14 playoffs and finished with 15 wins, 11 defeats and one draw.

Months after leaving Japan Rugby Top League squad Suntory Sungoliath to pursue his dream of playing in France, Matsushima also exhibited a flair for the dramatic. In Clermont’s 27-25 comeback victory over Wasps in the European Rugby Champions Cup on April 3, scoring a try on the final play of the Round of 16 match.

Agence France-Presse reported: “Matsushima found a gap and, although tackled short of the line, squirmed over to level the scores.” Teammate Camille Lopez’s kick put the finishing touches on the game.

Reflecting on his first season in France, the South African-born Matsushima, whose father is Zimbabwean, said it was a positive experience. “I was able to play in many games and grow,” he told NHK in June.

It’s early in the 2021-22 Top 14 season, and Clermont is dealing with a poor start, after winning just one of its first four matches. Clermont’s latest setback was a 27-15 defeat to reigning champion Toulouse on Sunday, September 26.

Matsushima, who scored six tries in 22 league matches in the previous campaign, made his season debut in Week 2 on September 11 against Castres in a 34-30 defeat.

Jonno Gibbes, Clermont’s new head coach, said his team didn’t play well enough to beat Castres. His post-match assessment included the following remarks: “We are also lucid and honest enough to say that there are key moments that we have mismanaged. … I cannot question our effort, but we lacked precision.”

Matsushima then played all 80 minutes in Clermont’s 23-22 triumph over La Rochelle on September 19.

Striving to Score His First Try of the Season

Known for his try-scoring abilities, Matsushima, who primarily lines up at fullback for Clermont, is still seeking to make his first scoring play of the current Top 14 season.

Some of the biggest matches of Matsushima’s career have been highlighted by pulsating tries. Which illustrates that speed and elusiveness with the ball in his hands are complementary skills.

Remember: Matsushima produced Japan’s first hat trick in RWC history against Russia on September 20, 2019. True, Russia isn’t a rugby world power, but Matsushima’s point-getting efforts weren’t through after the 30-10 rout of Russia. He finished third among Rugby World Cup players with five tries. Wales’ Josh Adams was No. 1 with seven, followed by South Africa’s Makazole Mapimpi, who had six.

And don’t forget that Matsushima’s veteran savvy and fast pace have headlined his transition from Japan (his mother’s native land) to France. His three-try effort against the Bristol Bears in a Champions Cup match on December 12 underscored the fact that he fits in with Clermont.

After his club’s 51-38 victory over Bristol in December 2020, in which Matsushima scored tries in the third, 26th and 68 minutes, then-coach Franck Azema said: “We feel whether it’s on or off the field in daily life he’s blossoming. He feels good, he smiles, so we’re happy. That’s why we signed him. We’re happy that we’re seeing more and more of him on the field. He’s a big competitor in every sector, under the high ball and he’s very efficient in his play.”

Two months earlier, Matsushima notched a two-try effort against Pau in a 50-29 Clermont triumph. It was the biggest message he delivered early in his debut season in France, providing a bold reminder of his value to Clermont a few weeks after sustaining a leg injury in the first regular-season match on September 6. Matsushima put points on the board in the 46th and 77th minutes, showcasing different ways to score, different ways to excite fans and frustrate foes.

On the first try, Matsushima snatched a pass from Lopez and seized the moment, capitalizing on ball possession deep in Pau territory to advance it past the try line.

On the second try, he reminded this longtime sports observer of an NFL running back, absorbing contact from opposing players as he ran down the right side of the field and muscled his way past them all en route to a score.

Returning to the current season, Matsushima gave another glimpse of his ball-carrying skills against Toulouse on September 26. On one such play in the first half, he covered roughly 40 meters before being brought down close to Toulouse’s 22-meter line.

Matsushima was not named to Japan’s 44-man training camp squad prior to its upcoming clash with Australia in Oita, followed by the Brave Blossoms’ European tour tests (Ireland, Portugal and Scotland) in November. Currently, the roster consists of players who compete for Japan-based teams.

In non-World Cup years, giving younger players opportunities to gain international experience is often a top priority for national team coaches. But know this: Matushima, who coped with an ankle injury before the Top 14 season, would welcome the chance to don the Brave Blossoms uniform before the year’s end if he’s called up.

In an interview with Yahoo Japan earlier this month, Matsushima said he wants to improve his passing skills.

After all, tries alone don’t define a rugby match. Nor do they define what Matsushima has accomplished ー and will still accomplish ー on the field.

It’s a positive sign that at this stage of his career he’s still hungry to keep getting better. 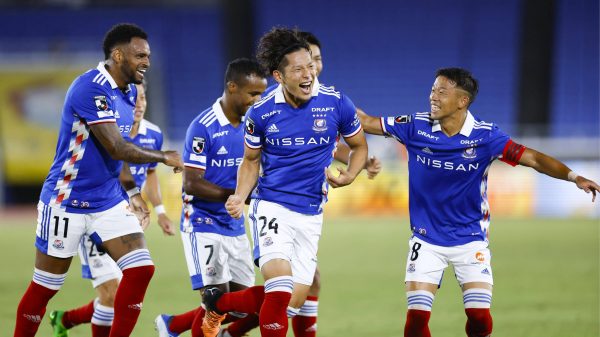