Whales: Bond with These Clever Creatures at Kamogawa Sea World 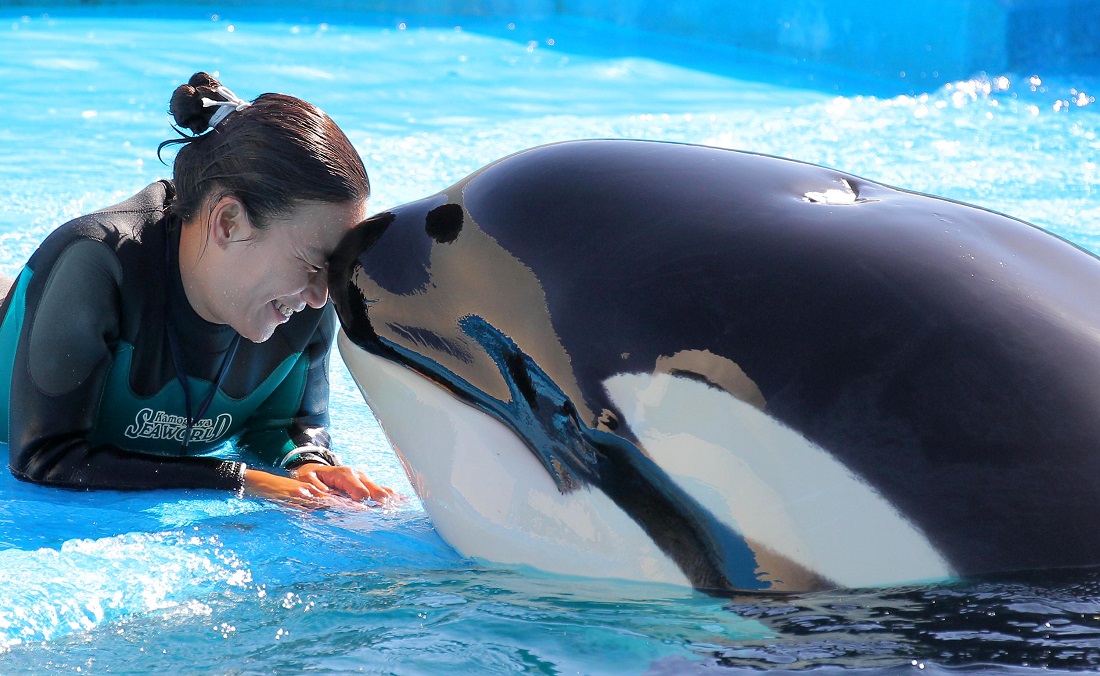 Welcome to the “Killer Whale” show, the most popular event in Kamogawa Sea World along the coast of Chiba Prefecture.

Some of the killer whales’ high jumps exceed five meters in height, and the animals are compelling and believable. Children, keeping away from the flying spray from the pool, shout for joy watching the aquarium.

Killer whales, a member of the whales and dolphins family, are carnivorous. The largest killer whales are over seven meters in length and weigh over five tons. They are said to be the strongest among the creatures living in the ocean and they stand at the summit of the whole biological system. Killer whales are the “Kings of the Ocean” as they attack seals and other whales.

Killer whales belong to Cetacea Suborder Odontoceti Delphinidae, the same family as bottlenose dolphins, and are the largest member of this family. The scientific name is Orcinus orca (an evil from the underworld). They are found in the oceans across the globe and live in groups.

A total of seven killer whales are now housed in two aquariums inn Japan. It was in 1970 that the first killer whales arrived in Japan—two killer whales, including one male and one female, came to Kamogawa Sea World from the United States.

“They are curious enough to understand us, in contrast to their fierce and strong image,” said killer whale trainer Kanae Komatsu, 33, with a smile. She has fed the whales here for 11 years.

They are clever and friendly as well. They never miss a chance to make the audience feel happy, like getting closer to members of the audience posing for a picture in front of the water tank, or splashing water on children yelping with delight

Komatsu said killer whales are more intelligent than dolphins and are good at judging people. Therefore, they often turn away if they don’t trust us.

When Komatsu was still new here, the whales ignored her cues, even though she called them many times. “They were making a fool of me to see that I get puzzled,” she says, smiling bitterly.

Komatsu spends almost the whole day in the pool, not only training but feeding and checking the health of the whales, all in a way designed to maintain a good relationship with Lovey and the other three killer whales.

“I think the audience can connect with killer whales as living creatures if the audience is able to realize what they really look like, how they cry, and how they smell from up close,” said Kamogawa Sea World Zoological Operations director Hiroshi Katsumata.

However, the aquarium has several serious problems, among them restrictions on the fostering of new killer whales for the next generation. According to the Fisheries Agency and other research institutions, the government limits the number of animals captured in the wild for any other purpose than academic research and nature conservation.

The aquarium has no plan to get more killer whales from the wild. Breeding killer whales in Japan seems difficult as the blood relationships among them are quite close. Kamogawa Sea World is now exploring a new way to artificially inseminate sperm imported from an overseas aquariums in order to take advantage of the precious opportunity to increase their population—and help visitors communicate with such a large marine species.

Music played in the packed arena of the Chiba aquarium, and when it finished, Komatsu came up to the stage. Lovey quickly approached her and came out of the pool. Lovey’s body was large, in black and white. Then, suddenly, Lovey flipped out beyond her human trainer.

“I want it to be an amazing show so that the audience can feel how killer whales are powerful and clever,” she said. There is a strong bond between humans and killer whales in this aquarium.

2019-12-12
Previous Post: Dancing With the Evil Fishermen of Taiji
Next Post: Behind THE COVE’: A Visual Take On the Whaling Issue