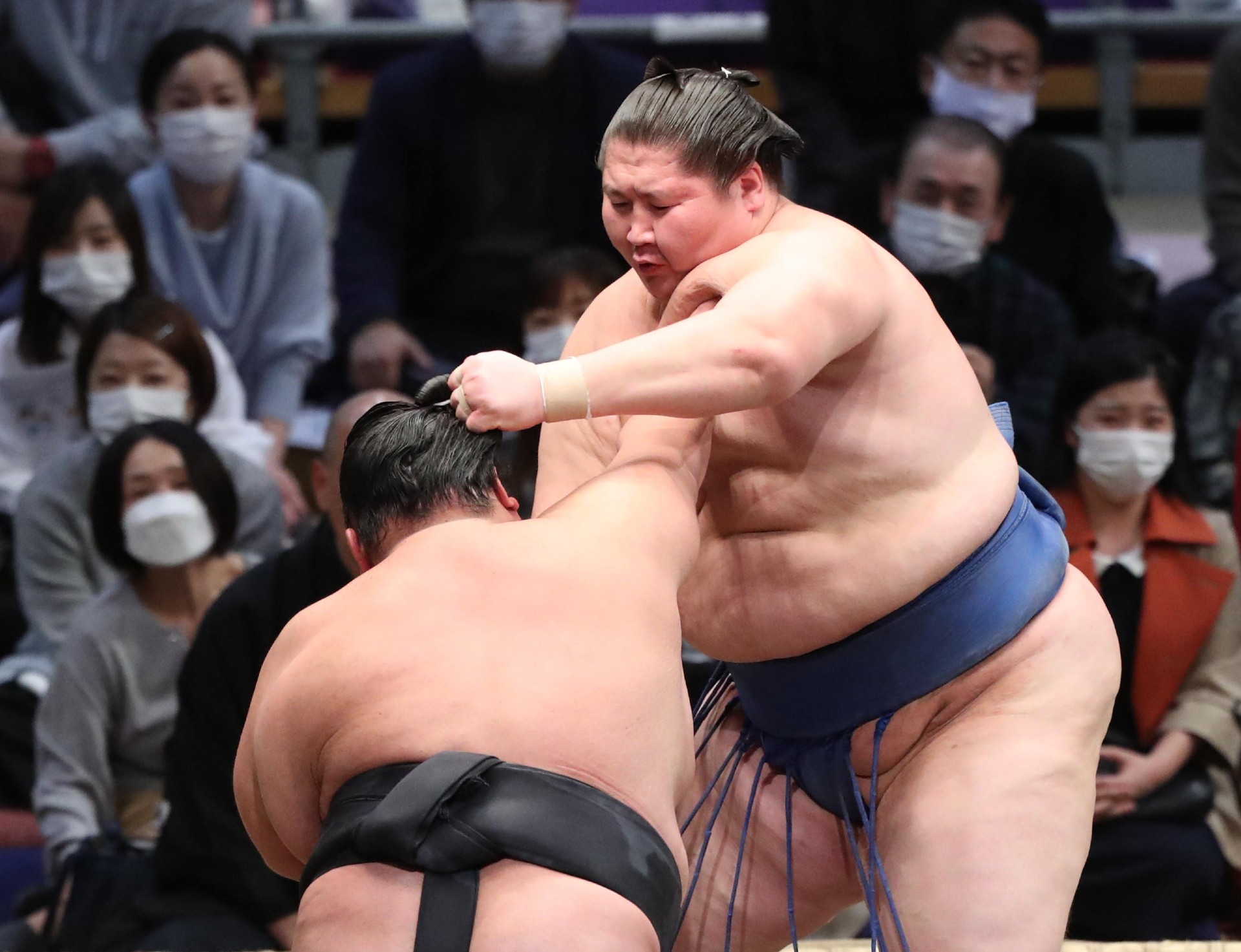 Komusubi Ichinojo grabs ozeki Takakeisho's topknot during their Kyushu Grand Sumo Tournament match on November 21 in Fukuoka. Ichinojo was disqualified as a result.

Ozeki Takakeisho won a controversial bout over Mongolian behemoth Ichinojo on Sunday, November 21 to remain undefeated and tied for the lead with yokozuna Terunofuji on Day 8, the midway point of the Kyushu Grand Sumo Tournament.

In the day’s penultimate bout, the referee initially ruled that komusubi Ichinojo had won when he drove Takakeisho off the raised ring after a prolonged standoff.

But the ringside judges immediately called for a mono-ii (video) review and determined that the 206-kg Ichinojo had pulled on the topknot of Takakeisho earlier in the bout and was thus disqualified, handing the win to the resurgent ozeki wrestler.

Grabbing the topknot is a major no-no in sumo and replays clearly showed that Ichinojo had a hold of Takakeisho’s during the bout.

Takakeisho, who had an 8-7 record in the September tournament, improved to 8-0 and wrapped up a winning record. Ichinojo dropped to 3-5.

In the day’s final bout at Fukuoka Kokusai Center, Terunofuji barely broke a sweat when he shoved out fourth-ranked maegashira Endo (4-4) in a matter of seconds to keep a clean slate at 8-0.

Mongolian Terunofuji, the lone yokozuna competing in sumo, is gunning for his second straight Emperor’s Cup at the sport’s highest rank.

Elsewhere, sekiwake Mitakeumi and rank-and-filer Abi are one win off the pace at 7-1.

Mitakeumi got both arms around veteran Okinoumi (2-6) and drove the No. 3 maegashira out with a frontal force out.

Kyushu native Shodai turned in a crowd-pleasing performance and improved to 5-3 when he used a right-hand thrust down to dispatch struggling No. 3 maegashira Myogiryu, who lost his fifth straight bout and dropped to 2-6.

Hard-luck komusubi Kiribayama picked up only his second win when he overpowered Daieisho to improve to 2-6. Top maegashira Daieisho has also had a rough first week and dropped to 3-5.

Further down the ranks, No. 15 maegashira Abi stayed one win off the pace at 7-1 with a frontal force out of Hidenoumi, a ninth-ranked maegashira who dropped to 5-3.

Eighth-ranked maegashira Tobizaru handed Tamawashi just his second defeat with a perfectly timed right-foot sweep to improve to 5-3. No. 6 maegashira Tamawashi lost for the first time in six bouts and dropped to 6-2.

Former ozeki Takayasu, a No. 5 maegashira, notched his first win in three days when he got a left-hand grip on the belt of Chiyoshoma and drove the seventh-ranked maegashira out to improve to 5-3.

Mongolian Hoshoryu, a fifth-ranked maegashira, dodged to his left at the edge and defeated No. 2 maegashira Onosho (2-6) with an under-shoulder swing down to even his record at 4-4.

No. 7 maegashira Ura stayed in the pack of wrestlers at 6-2 when he overpowered rank-and-filer Chiyotairyu who was handed his third loss against five wins.

First Star: Ozeki Takakeisho. Even though he was shoved out by Ichinojo, the much smaller wrestler turned in an impressive performance against the 206-kg Ichinojo. Replays of the bout showed that even if Ichinojo hadn’t pulled on Takakeisho’s top-knot, the ozeki wrestler might have won the bout anyway as Ichinojo stepped out as Takakeisho was flying through the air before tumbling to the hard surface outside the ring.

Second Star: Ichinojo. That may come as a surprise but Ichinojo’s grabbing of Takakeisho’s topknot was most likely unintentional. The giant komusubi turned in what looked like a winning performance and almost defeated the determined ozeki.

Third Star: Mitakeumi. The sekiwake is quietly lurking in the weeds and is very much in contention at 7-1 as the tournament enters the second week.