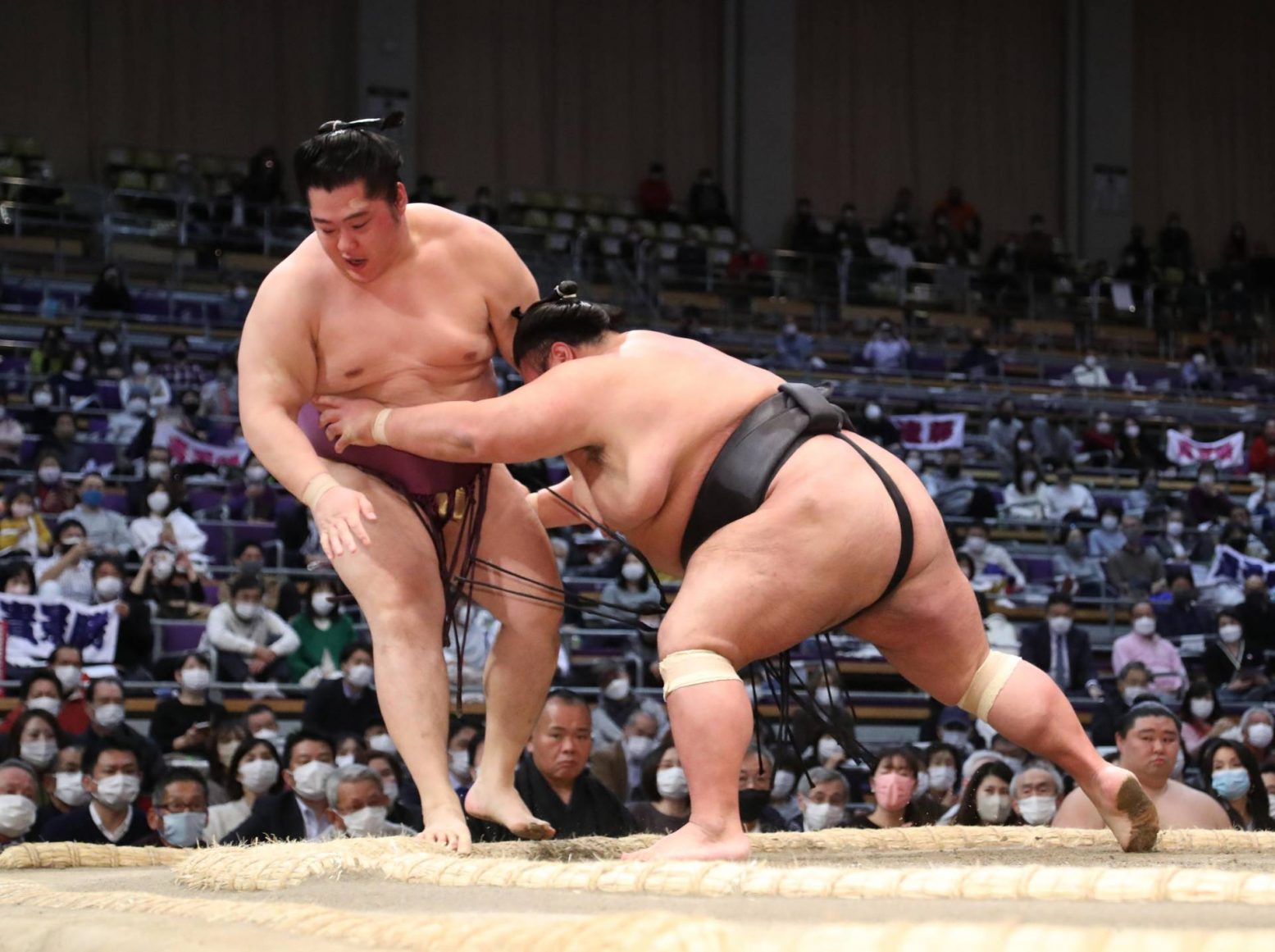 Ozeki Takakeisho shoves fourth-ranked maegashira Endo out of the raised ring at the Kyushu Grand Sumo Tournament on November 24 in Fukuoka.

Ozeki Takakeisho bounced back from a painful loss to Meisei on the previous day with a win over Endo on Wednesday, November 24 to remain one win behind lone yokozuna Terunofuji at the Kyushu Grand Sumo Tournament.

Takakeisho used a series of powerful arm thrusts while preventing Endo (5-6) from getting a grip on the belt to dispatch the fourth-ranked maegashira and improve to 10-1, tied with lower-ranked wrestler Abi.

There were reports Takakeisho may have injured his knee in his win over Hoshoryu on Day 9 and that may have contributed to his loss to Meisei. He wasn’t moving around the ring very much in Wednesday’s bout so it remains to be seen how he can perform over the remaining four days.

In the day’s final bout at Fukuoka Kokusai Center, Terunofuji had his hands full with fellow Mongolian Ichinojo, who weighs in at 206 kilograms.

Komusubi Ichinojo gave Terunofuji a run for the money but the grand champion eventually toppled his larger opponent to improve to a perfect 11-0. Ichinojo, who just ran out of steam, dropped to 4-7.

Terunofuji will face Meisei on Day 12, while Takakeisho takes on Takayasu.

Mitakeumi, Tamawashi and Hokutofuji are all two wins off the pace at 9-2.

Struggling ozeki Shodai got arms around Meisei and shoved his opponent out to improve to 7-4 and take a major step toward securing a winning record. Sekiwake Meisei dropped to 5-6.

In the day’s first bout with championship implications, No. 15 maegashira Abi improved to 10-1 when he used a series of arm thrusts to the head to topple seventh-ranked maegashira Ura, who dropped to 8-3.

Abi, who has posted his best record ever in the makuuchi division, will face Tamawashi on Day 12.

The Shikoroyama stable wrestler has looked impressive in this tournament, a far cry from last year when he was suspended by the Japan Sumo Association for violating Covid protocols and threatened to retire.

Mongolian Tamawashi, a No. 6 maegashira, used a thrust down technique at the edge of the ring to dispatch Chiyotairyu and improve to 9-2. Tenth-ranked maegashira Chiyotairyu dropped to 5-6.

Sekiwake Mitakeumi kept his title hopes alive and improved to 9-2 when he thrust out Takayasu, a fifth-ranked maegashira who dropped to 5-6.

Rank-and-filer Hokutofuji also stayed two wins off the pace at 9-2 when he bundled out No. 15 maegashira Chiyomaru, who fell to 5-6.

Hoshoryu exchanged a series of slaps to the head with Tobizaru and finally got a left-handed grip on the belt of the No. 8 maegashira to send him over the straw ridge and give both wrestlers a record of 5-6.

Fifth-ranked maegashira Hoshoryu, a nephew of former yokozuna Asashoryu, gave Tobizaru a stare down after defeating his opponent that would have made his uncle proud. Tobizaru grabbed Hoshoryu’s head during the bout, a move that no doubt raised the ire of the 22-year-old Mongolian.

Top maegashira Wakatakakage, desperate to avoid a losing record in the Kyushu meet, swatted down No. 3 Okinoumi immediately after the face-off to give both wrestlers a record of 4-7. If Wakatakakage can win all his remaining matches, he will finish with a winning record.

Kiribayama got a left-hand grip on the belt of third-ranked Myogiryu (2-9) and used a textbook lift-and-dump technique to improve to 4-7.

It’s been a tough tournament for the newly promoted komusubi but Wednesday’s win was no doubt the highlight for the Mongolian wrestler.

First Star: Takakeisho. Despite possibly having a sore knee, the ozeki came through with a clutch win that keeps him in the title chase heading into the final four days. A loss to Endo on Wednesday would have all but dashed Takakeisho’s chances.

Second Star: Abi. The No. 15 maegashira has put in his best performance ever in the elite makuuchi division and is right in the thick of the championship race. He will have his hands full on Day 12 in a showdown with Mongolian Tamawashi.

Third Star: Terunofuji. Just being able to outlast the 206-kilogram Ichinojo is worthy of third star honors, not to mention the fact that Terunofuji took a major step toward winning his second straight Emperor’s Cup at sumo’s highest rank.